A utility company in Donetsk in eastern Ukraine is using the image of Adolf Hitler in billboard advertisements to target their customers who fail to pay their gas bills on time, according to RIA Novosti.

The advertising slogan "Those who don`t pay for their heating will be punished!" together with the wacky image of the Nazi leader impaled on the bayonet of a Soviet soldier is being used to encourage people to clear their debts. 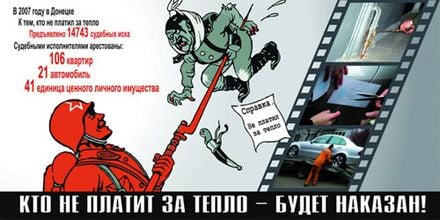 A first deputy head of the utility company, Donetskgorteploset, Oleksandr Semchenko explained the reasoning behind using the image of Hitler as a persistent non payer was intentional.

"This image shows citizens that debtors are like an enemy... And the image of a defeated and crushed enemy reminds all non payers that the punishment for failing to pay their gas payments is inevitable," Semchenko said.

The official said customer debts were causing the company huge losses, and making it difficult to pay for gas supplies. The company has filed over 14,000 lawsuits against non payers, and several thousands debtors have had their hot water and gas supplies disconnected for failing to clear their debts.

The campaign has meanwhile attracted fierce criticism from the Donetsk Mayor, Oleksandr Lukyanchenko.

"This is stupid I can`t call it anything else. I will find out who is responsible. The billboards will certainly be withdrawn," Lukyanchenko told journalists.