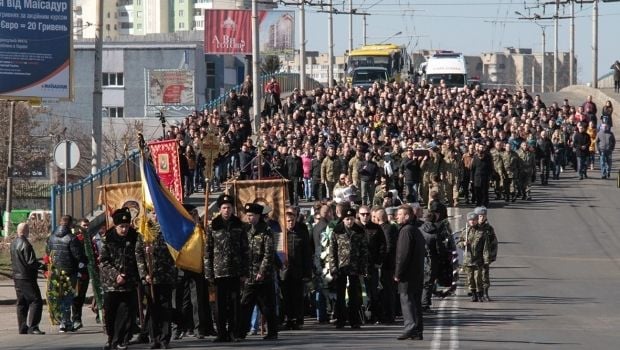 The funeral procession of the murdered SBU officer in Lutsk / Photo from visnyk.lutsk.ua

"This morning, during an attempt to illegally cross the state border, the officers of the SBU detained the killer of Viktor Mandzyk. As I promised the family of the deceased, it was a matter of honor for me and the Ukraine’s SBU state security service," Poroshenko said.

"The operation continues, everyone who was involved in the murder of our officer will be found and punished," Poroshenko said.

As UNIAN reported earlier, SBU officer Mandzyk was killed on March 21 in Volnovakha. A total of 11 people were detained on suspicion of his murder. As a result of searches, a large arsenal of weapons and explosives was seized from those detained.

On March 23, SBU Chairman Valentyn Nalyvaichenko said that a citizen of Ukraine, Denis Hordeiev, who was suspected of the murder, had been declared wanted.