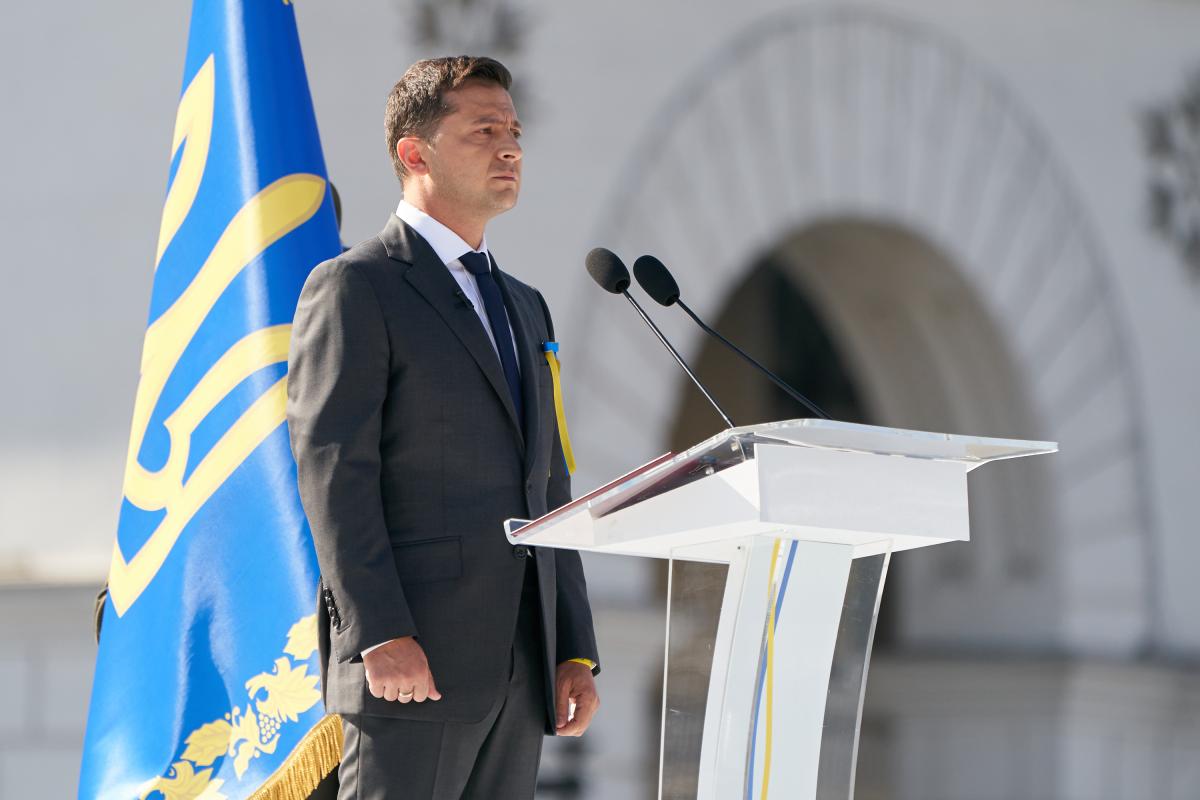 On August 24, Ukrainian President Volodymyr Zelensky and First Lady Olena Zelenska took part in festivities on the occasion of the 28th anniversary of independence of Ukraine.

At the Alley of the Heavenly Hundred Heroes, the president announced a moment of silence for those killed during the Revolution of Dignity, according to the presidential press service.

"We begin the Day of Independence of Ukraine from the place where the best sons and daughters of Ukraine gave their lives and their future to preserve our independence. And today, our future says 'Thank you' to all of them. May the memory of the deceased live forever," Zelensky said.

The president of Ukraine and his wife also laid flowers to the Cross at the Alley of the Heavenly Hundred Heroes.

After the ceremony of hoisting the State Flag of Ukraine and performance of the State Anthem by the combined military orchestra of the Armed Forces of Ukraine, the president congratulated Ukrainians on the 28th anniversary of independence. Zelensky noted that August 24 was the most important day for Ukraine. The president thanked the military who defend Ukraine in Donbas.

"Thanks to you we mark the 28th anniversary of independence today," he said.

The president expressed hope that hostilities would soon be finished and peace would come to the country.

"On this important day, we believe that another equally significant date will appear in the Ukrainian calendar. The exact day and month are not important. For this will be the day when peace comes," he said.

Zelensky also urged all Ukrainians to unite and build the country together.

"We are different. But we are united. We must be united, because only then we are strong. We should understand that we have to count only on ourselves. Not to quarrel over the past, but to unite for the future. Ukrainian-speaking and Russian-speaking, regardless of age, gender, religion – we must be one people. Not on posters, not on slogans, but here. In everyone's heart. We must move forward, build the country together, do the impossible together," the president said.

At the same time, he expressed confidence in the future development of the state because of the new generation formed in times of independence.

"Today, an entire generation, born in independent Ukraine, has already formed. For them, this is a normal state of affairs. It can't be different for them. And that's wonderful. Because this generation is our mental foothold. Foothold for freedom, democracy and development. They think differently, they think in a modern way, which means that Ukraine will only move forward," Zelensky said.

The president also presented state awards in the framework of marking the 28th anniversary of Ukraine's independence.

If you see a spelling error on our site, select it and press Ctrl+Enter
Tags: #News of Ukraine#Ukraine#independenceday#celebrations#Zelensky
Latest news