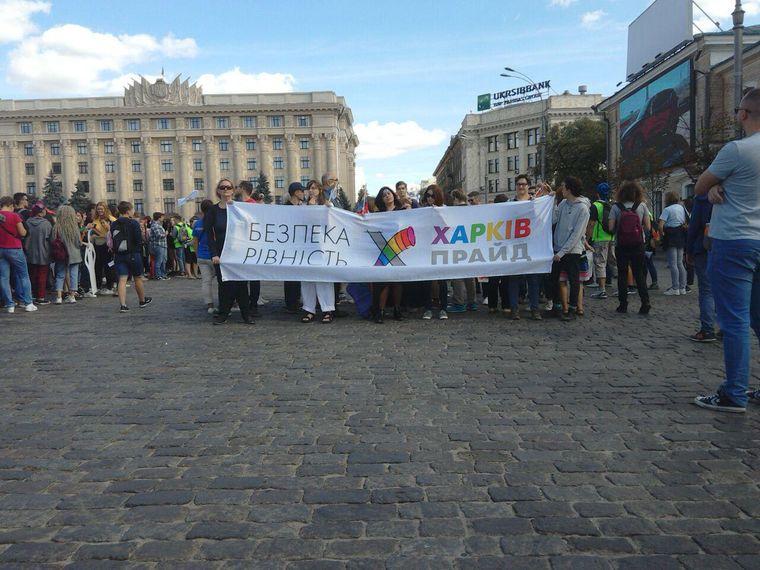 There was a heavy police presence / Photo from hromadske

Thousands of gay and lesbian activists and supporters paraded in the eastern Ukrainian city of Kharkiv, marking the city's first pride march.

Scuffles broke out toward the end of the September 15 march, with right-wing demonstrators clashing briefly with police in a nearby park, Radio Free Europe / Radio Liberty's Ukrainian Service reported.

Two police officers were treated for exposure to tear gas or pepper spray, authorities said, and 17 people were detained as a result.

Three of of them were arrested for threatening or violence against a law enforcement officer.Two are aged 23 and one is 21 and are accused of spraying tear gas at police officers.

With an estimated 2,000 people participating, the march was one of the larger such events to be held in Ukraine in recent years, as LGBT campaigners have stepped up efforts to gain recognition, support, and protection.

The pride march went forward despite efforts of Mayor Hennadiy Kernes, who had threatened legal action against organizers, to try and block them from marching. Conservative activists had also threatened violence.

International rights groups including Amnesty International had called on Ukrainian authorities to allow the march and provide adequate security.

In the end, the march was limited to a square outside a downtown subway station, leaving participants to march back and forth for about two hours.

Many marchers waved rainbow flags and chanted "Kharkiv For All, Security For All!" and "We Are All Equal, We Are All Different" as they paraded.

There was a heavy police presence, including helmeted riot police carrying crowd-control shields, who monitored the event.

A smaller counterprotest consisting a few dozen people, many wearing masks, was held not far from the main site. Some of the counterprotesters threw eggs at the pride marchers.