Starting from 8 February, the participants will compete in "Vidbir 2020". 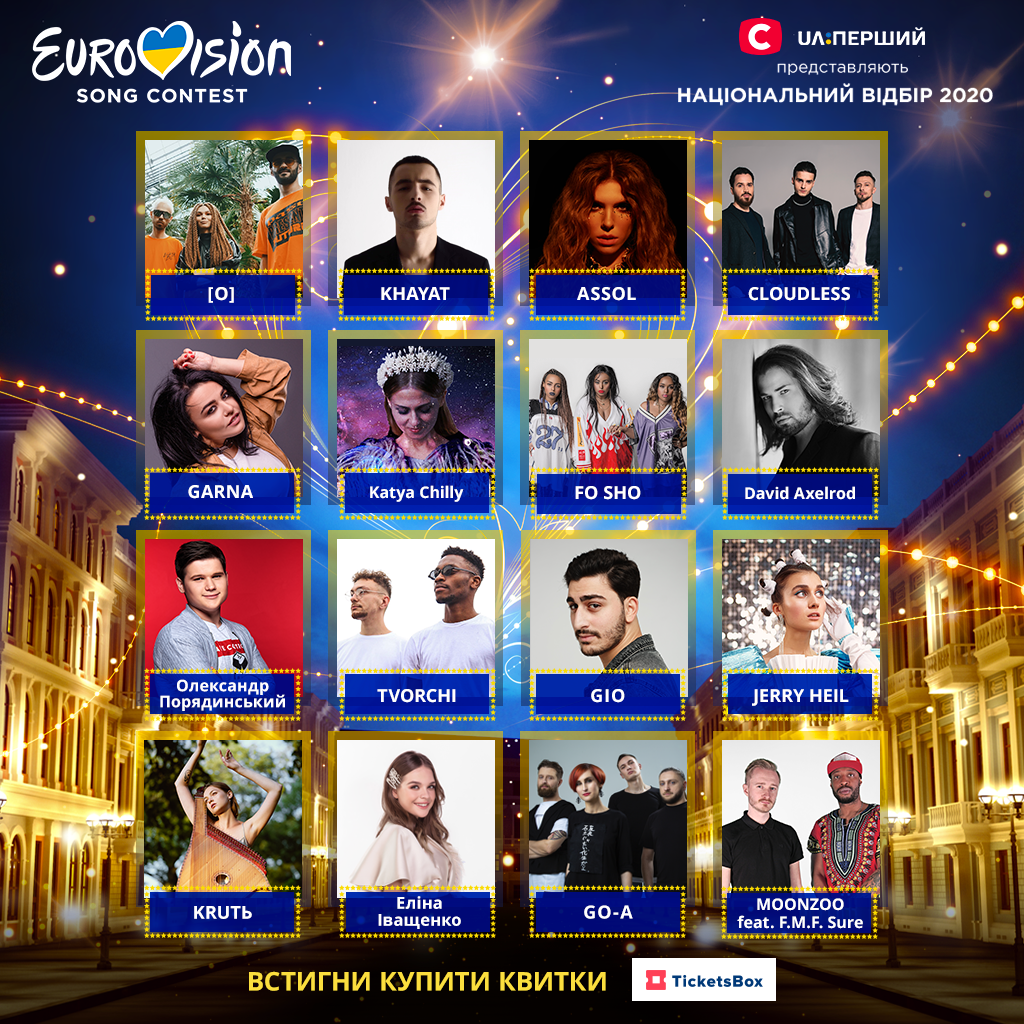 Starting from 8 February, the participants will compete in national selection Vidbir 2020, according to Eurovision.tv.

The participants of Vidbir 2020 will compete for the right to represent Ukraine at the Eurovision Song Contest 2020 in Rotterdam, the Netherlands.

CLOUDLESS boy band gained popularity in 2017 with their song Mizh Svitamy (Between the Worlds) that became a soundtrack for a TV series. The band's songs often make their way to Ukrainian TV series and shows.

David Axelrod is a famous Ukrainian singer, musician and composer.

Elina Ivashchenko has been in the music business since the age of 5. She won the Ukrainian X Factor and The Voice Kids, she is a radio hostess, a vocal coach, and the Grand Prix winner at the Black Sea Games 2018.

FO SHO is an African Ukrainian hip hop project founded in early 2019. Sisters Betty, Miriam and Siona Endale are very proud of their cultural diversity and demonstrate it in their songs and energetic live performances. Their music is a combination of genres, from trap to hip-hop.

Garna is a solo project of the Ukrainian singer Aliona Levashova in collaboration with music producer Oleksii Khorolskyi. Aliona writes her own songs and sings with the symphonic crossover orchestra Prime Orchestra and cover band Manera.

GIO is a young pop musician who writes songs and composes music, participated in The X Factor and The Voice and has performed with the orchestra Lords of The Sound.

Katya Chilly is a famous Ukrainian singer, musician and composer and has headlined many music festivals. The singer’s achievements include 5 albums, appearances on MTV and BBC, more than 40 solo concerts in the UK and over 1000 in Ukraine.

KHAYAT is a young Ukrainian artist and songwriter, performing in folktronica genre. KHAYAT was a semi-finalist in last year's Ukrainian national selection. After Vidbir 2019, he released his debut album KHMIL that combines electronic music, ethnic melodies and Oriental tunes.

MOONZOO feat. F.M.F. Sure is a collaboration of the Ukrainian electronic band MOONZOO and American rapper F.M.F. Sure. Released in late 2018, MOONZOO's debut album was named one of the best releases of the year by Ukrainian media.

[О] is a Ukrainian indie-pop band that won the award ‘Hit of the Year’ by Kiss FM and the prize ‘Fresh Blood’ by Jagermeister Music Awards. They were twice a finalist of APPS Music & SZIGET, performed at more than 20 musical festivals including Koktebel Jazz Fest, White Nights, Atlas Weekend and Waves Vienna.

Oleksandr Poriadynskyi is a singer and composer, songwriter, the youngest winner of the Ukrainian X Factor.

TVORCHI are a young band from Ternopil that have enjoyed success all over the world. Their song Believe ranked top 10 in the Ukrainian Google Play charts.

Vidbir 2020 will be divided in 2 semi-finals on Saturday 8 and Saturday 15 February, and a final on Saturday 22 February. Which artists will play in which semi-final and in which order will be announced on Wednesday 22 January. The 3 shows will be hosted by Serhii Prytula.

The Vidbir jury will consist of 3 members, Andrii Danylko (Verka Serduchka, Ukraine 2007), Tina Karol (singer, TV hostess, Ukraine 2006) and Vitalii Drozdov (director-general of Hit FM radio), and will decide 50% of the outcome. The other 50% will be decided by the Ukrainian audience.