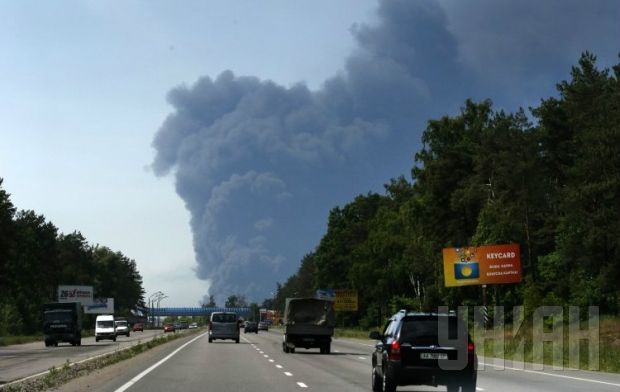 "The temporary resettlement of citizens within a two-kilometer zone from the danger zone has started,” Chechetkin said.

“The resettlement of people within a 10-kilometer zone may take place if needed. The fire is being brought under control. Rescuers from Zhytomyr, Cherkasy, Chernihiv regions have been involved in building up resources and carrying out monitoring of the situation. The main efforts are aimed at preventing the spread of fire in the direction of a military unit located 50 meters away from the fire’s edge."

Chechetkin said that the situation is totally under control, posing no obvious threat to the lives of people there. However, there is a likelihood of more explosions, he said.

As UNIAN reported earlier, on Monday evening a fire broke out at a petroleum depot near the village of Glevaha, Vasylkiv district, Kyiv region.

Today at about 0800 a massive explosion occurred at the tank farm. Interior Minister Arsen Avakov reported that six firefighters had been hospitalized with burns.

There was also information about one dead and five injured employees of the fuel depot.

More than 400 soldiers of the National Guard of Ukraine have been deployed at the scene.

Earlier, the head of Kyiv Regional State Administration Volodymyr Shandrur said that there was no plan to evacuate residents in the area of ​​the fire near Vasilkov.