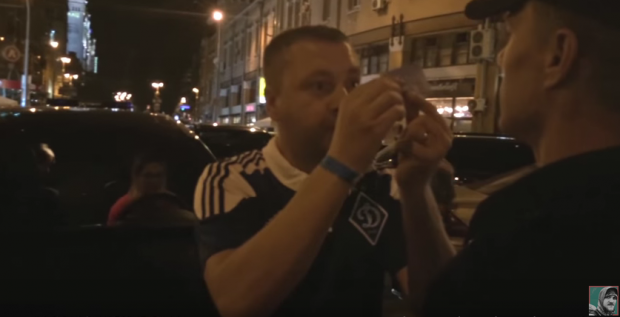 The cops let the dilpomat go / screenshot from video

"At the moment, the German Embassy cannot confirm this incident, we are checking all facts. In general, all employees of the German Embassy are required to abide by the rules of the host country. Of course, this also applies to traffic rules," the report reads.

Earlier, a video has been released on the network, where a tipsy diplomat came into conflict with the Kyiv patrol police, yelling and waving hands at cops near the Besarabski market in Kyiv center.

The video shows the crowd gathered around a black Volvo, preventing it from driving away. Two cops were standing in front of a car hood, blocking the vehicle driven by a German diplomat (allegedly intoxicated), according to eyewitnesses.

Read alsoKyiv’s new police symbol of changeAt the request of the police to muffle the engine, come out of the car and show a driver's licence, a man reacted aggressively, shouting and waving his arms, then accelerating his vehicle in he direction of police officers and two witnesses.

After his hood has been hit, the man stopped and ran out of the car with an aggressive speech about his rights and immunity, saying that nobody had the right to film him (he knocked the phone out of the hands of a witness).

After a verbal altercation with the police (in English), a man sat behind the wheel and was let go by police.