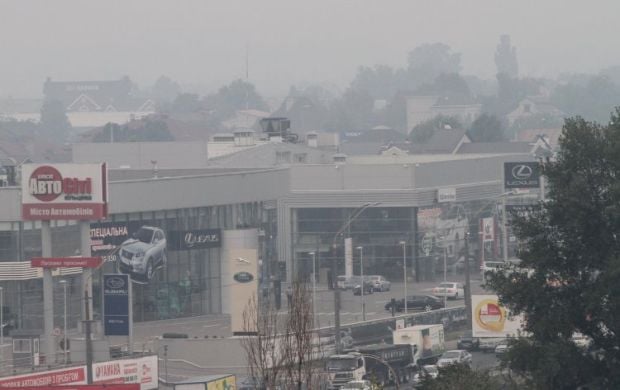 Smog in Kyiv / Photo from UNIAN

"As for the harm to the the residents of Kyiv, now there is an increase of sulfur dioxide in the air by 5.8 times. It is a colorless gas which may cause irritation of the upper respiratory tract, while it does not inflict substantial harm," head of Ukraine’s State Emergency Service Mykola Chechotkin said at a press conference on September 3.

As UNIAN reported earlier, on September 2, a forest fire broke out in the village of Zazymya near Kyiv. The smoke has spread almost across the entire capital.

Read alsoDeputy Ecology Minister: Japan wanted to withdraw the "Kyoto money" from Ukraine, outraged that 'one of our hands does not know what the other is doing'Also for the third consecutive day, the firefighters try to extinguish fires on 24 hectares between the villages of Koblytsya and Velykyi Lis in Borodyanka district.

UNIAN memo. Sulfur dioxide is a Sulfur dioxide (alsosulphur dioxide) is the chemical compound with the formula SO2. At standard atmosphere, it is a toxic gas with a pungent, irritating, and rotten smell. The triple point is 197.69 Kand 1.67 kPa. It is released naturally byvolcanic activity.

Sulfur dioxide is an intermediate in the production of sulfuric acid, being converted to sulfur trioxide, and then to oleum, which is made into sulfuric acid.

In mild cases of poisoning it may cause a cough, runny nose, watery eyes, dry throat, hoarseness, chest pains; acute poisoning is accompanied by moderately severe headache, dizziness, weakness, pain below the chest area; signs of chemical burns of the mucous membranes of the respiratory tract. Maximum permissible daily average concentration must not exceed 0.15mg/m³.