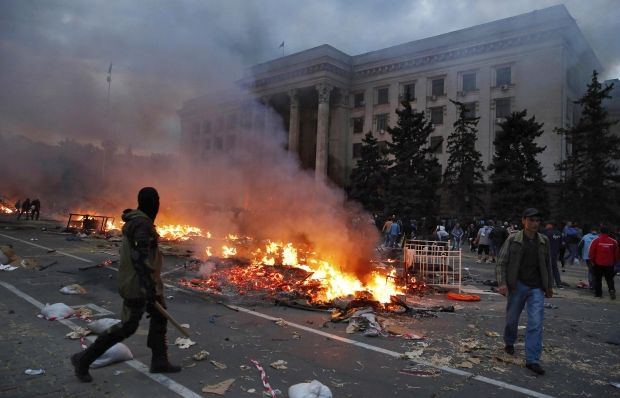 The clashes in the center of Odesa and the fire in the Trade Union Building on May 2, 2014 resulted in 48 deaths and injuries to several hundreds of persons.

The Panel found that the investigations faced significant challenges but noted that these challenges "cannot excuse any failings which did not inevitably flow from them." The authorities were, and are under, an obligation to take all reasonable steps to ensure that the investigations comply with Article 2 (Right to life) and Article 3 (Prohibition of torture and inhuman and degrading treatment) of the Convention.

The Panel considered that the second and third investigations lacked institutional and practical independence. Given the evidence indicative of police complicity in the mass disorder of May 2, 2014 and the hierarchical relationship between the SES and the Ministry of the Interior, the investigations as a whole should have been carried by an organ independent of the Ministry.

The Panel further considered that the investigations were ineffective for a number of reasons: in particular, the division of the investigative work was inefficient and the resources allocated were inadequate. The quality of the investigation was also deficient, the authorities failing to show sufficient thoroughness and diligence in initiating and pursuing the investigations. The "most striking example of a lack of diligence," in the Panel's view was that the first real efforts to investigate an unexplained delay of over 40 minutes in the arrival of fire-fighters to the Trade Union Building, were not made until December 2014.

The Panel also addressed the question of the prosecution and trial of suspects. It expressed serious concern about the decisions to terminate the proceedings against two suspects on the grounds of lack of evidence and noted that the repeated recusals of judges had delayed the start of criminal proceedings, and that the decision to charge 21 persons in a single indictment without individualizing the charges against them had had an adverse impact on the proceedings.

As for the public scrutiny of the investigations and the involvement of the victims and next-of-kin, the Panel acknowledged that the authorities had promptly provided the public with basic information and facts but found some shortcomings, the most serious being the lack of consistency, evenness and regularity of the information provided. In contrast to the Maidan investigations, the authorities did not take any coordinated measures directly and regularly to inform the victims and next-of-kin about the progress of the investigations.

The Panel concluded that, as a result of these investigative deficiencies, substantial progress had not been made in the investigations into the violent events in Odesa on 2 May 2015.

The International Advisory Panel was constituted by the Secretary General of the Council of Europe in April 2014, initially to oversee the Maidan violence investigations. In September 2014, the Panel’s mandate was extended to examine whether the Odesa investigations met all the requirements of the European Convention on Human Rights and the case-law of the European Court.