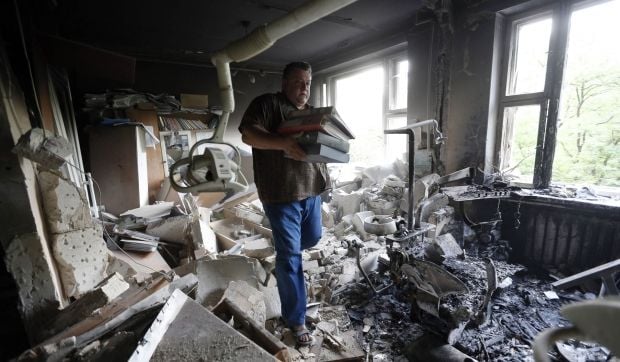 “I came to Ukraine to see for myself the consequences of the conflict in eastern areas for the civilians living there and those who have been forced to flee,” the UN Under-Secretary-General for Humanitarian Affairs, Stephen O’Brien, said in a press release issued in Kyiv on Thursday at the end of his visit.

“As the winter fast approaches, our top priority must be to quickly scale up the coordination and delivery of aid for the most vulnerable people, especially the elderly and ill,” he added.

According to the Office for the Coordination of Humanitarian Affairs (OCHA), which Mr. O’Brien heads, around four million people in eastern Ukraine need assistance and protection. Families do not have access to basic supplies and services, including food, clean water supply, and heating fuel.

Read alsoICRC sends 560 tonnes of humanitarian food, hygiene goods to occupied DonbasDuring his visit, Mr. O’Brien, who is also the Emergency Relief Coordinator, met the Prime Minister of Ukraine, Arseniy Yatsenyuk, and senior officials in the Presidential Administration in Kyiv. It was agreed that strengthening coordination and partnership to ensure that more aid can be delivered to all Ukrainians in dire need was of paramount importance.

After also meeting with the representatives of the de self-proclaimed authorities in Luhansk and Donetsk to discuss ways of improving humanitarian access to people in the non-Government controlled areas, Mr. O'Brien said that it has been important to speak to representatives of all conflict parties, who are responsible under international law for protecting and aiding civilians.”

Read alsoOSCE: Several UN organizations have no access to border with Russia“As a result of my meetings and the welcome assurances I received, I have confidence that I can count upon all the parties to facilitate immediate, unimpeded and sustained aid delivery. We and our partners remain ready to scale up the delivery of vital aid and are activating our plan to commence the transport of some 500 metric tonnes of blankets, food, medical supplies and shelter repair materials for people in the Luhansk area in the next few days,” announced Mr. O’Brien.

The Under-Secretary-General also noted that the UN “must do more to tell the world of the human suffering in the conflict areas.” He said international attention has been largely focused on the military and political situation in Ukraine, whereas “above all, peace and stability are what the Ukrainian people need.”