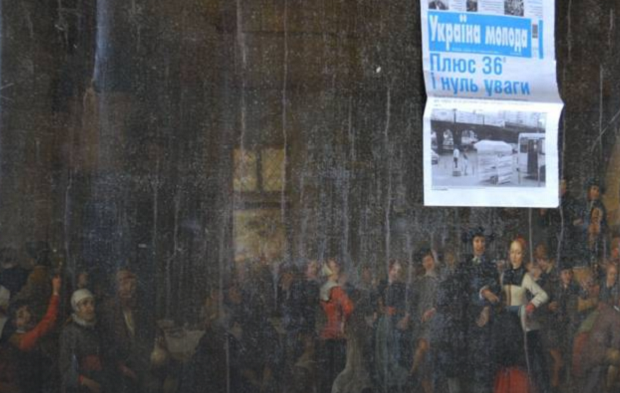 "On the night of January 9, 2005, 24 paintings and 70 pieces of silverware, the heart of the 17th and 18th century collection, were stolen from the Westfries Museum during a burglary. For years, the municipality of Hoorn had been hoping that the paintings and silver would resurface when last year, one of the stolen paintings first appeared on a Ukrainian website," the museum said in a statement on its official website.

"In July 2015, two individuals reported to the Dutch embassy in Kyiv who said that they represented a Ukrainian volunteer battalion. This OUN militia claimed to have the complete collection of stolen paintings from the Westfries Museum in their possession. A photo showing one of the paintings accompanied by a current Ukrainian newspaper was presented as proof for this claim," the statement said.

According to the museum, the militia stated that it was prepared to hand over the paintings to the Netherlands on certain conditions, one of which was that the Ukrainian authorities were not to be involved.

After the embassy informed the Dutch police and justice department, they decided to offer the municipality of Hoorn the opportunity to contact the owners of the stolen art themselves. Because the municipality of Hoorn had no experience in such matters, they decided to bring in Arthur Brand who specializes in art crimes and tracking down stolen art.

"Brand noticed during the initial interactions that the present owners had a completely unrealistic idea of the value of the stolen paintings. They estimated the value at 50 million euros," the statement said.

Brand presented a research report to his Ukrainian contacts that showed that, based on recent auction proceeds of comparable works of the same painters, the entire collection should be estimated at a minimum of 250,000 euros and a maximum of 1.3 million euros, if in good condition. Because the latter did not appear to be the case, he estimated the current market value at no more than 500,000 euros.

The museum claims that on behalf of the municipality of Hoorn, Brand offered the militia compensation, but received no response to the offer.

The municipality urged the Ministry of Foreign Affairs to attempt to expedite the case along diplomatic channels. Talks on the highest political levels were held but to no avail.

"At present, there are serious indications that the current owners of the stolen art are attempting to sell it to others. Further research by Brand shows that other highly placed individuals are operating behind the scenes of the volunteer battalion," the statement said.

The museum says that knowledgeable informants notify Brand that Oleh Tyahnybok, leader of the right-wing extremist party Svoboda, is pulling the strings behind the scenes. The name Valentyn Nalyvaichenko, former head of the secret service is repeatedly mentioned.

"The Westfries Museum has but one interest: to return the looted art to Hoorn as soon as possible before the collection is sold off in parts or deteriorates any further," the statement said.

According to the museum director Ad Geerdink: "We have done everything we can and have reached a dead end. Now that it seems that the art works are disappearing again, we want to sound the alarm to let potential buyers know that they are dealing with stolen art, to give a correct representation of the actual value of the art works, but also to send a signal that these art works only belong in Hoorn. They are invaluable to the story we are telling about the extremely riveting period of the Golden Age in West Friesland."

Mayor Yvonne van Mastrigt has expressed the hope that the Ukrainian government realizes that they have a responsibility in this matter and that they can play an important part in returning the stolen art to Hoorn.