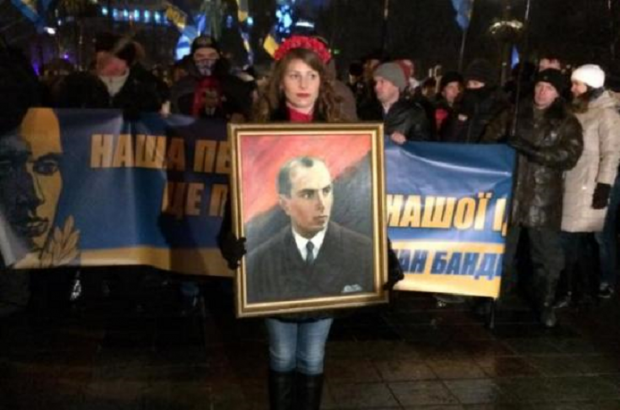 More than 3,000 people gathered on Maidan Nezalezhnosti for the 10th time to commemorate Bandera's birth anniversary / Photo from espreso.tv

More than 3,000 people came to Kyiv's Maidan Nezalezhnosti, or Independence Square, for a meeting to commemorate the anniversary on Friday. Prior to that, participants in the event had marched along the streets in the center of Kyiv, carrying torches, national blue and yellow flags, nationalist red and black flags, as well as the banners of the Svoboda Party, the Right Sector organization, the far-right political party Congress of Ukrainian Nationalists, according to an UNIAN correspondent.

A young woman was carrying Bandera's portrait in the front of the column. Nationalists with a large red and black flag and blue-and-yellow banners with Bandera's quotations: "Our Ideas are Our Greatest Strength!" "Competition is Our Natural Environment, a Struggle is the Essence of Our Life," and others were walking behind her.

They also called on the Ukrainian authorities to release all prisoners of conscience.

The column was moving along Shevchenko Boulevard towards Besarabska Square, and then turned left to Maidan Nezalezhnosti for the meeting. Members of Parliament from the Svoboda Party, the Congress of Ukrainian Nationalists, members of the Right Sector organization, soldiers who participated in the Anti-Terrorist Operation in Donbas and others took part in the assembly.

They noted the strong spirit of the Ukrainian nation in the fight against Russian aggression in the east of Ukraine. They also noted that Ukraine should rely on their own strength and should "cherish faith in God." Nationalists also stressed that that "it's unity that will lead to victory."

It was the 10th Bandera torch march in Kyiv.

A number of other Ukrainian cities and towns hosted similar torch parades and other events, including Lviv, Odesa, Kherson, Mariupol and the town of Sloviansk, which was occupied by the combined Russian-separatist forces from April to July 2014.

Participants in the Sloviansk event were chanting the Bandera movement's slogan: "Glory to Ukraine! Glory to the Heroes! Glory to the Nation! Death to Enemies! Ukraine Above Everything!" Their other slogans were: "Sloviansk is Ukraine. Crimea is Ukraine. Donbas is Ukraine."