A biathlon team from Ukraine with Yuliya Zhuravok, Nadiia Bielkina, Andriy Dotsenko and Artem Pryma won the IBU Cup 5 mixed relay in Ridnaun, Italy, on Sunday, in 1:21:32.1, using only four spare rounds, according to biathlonworld.com. 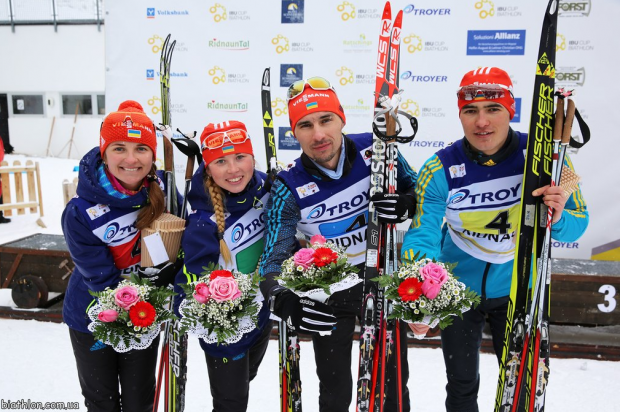 The Ukrainian team was really excited to score the second relay win in a day / Photo from biathlon.com.ua

The Ukrainian team was really excited to score the second relay win in a day.

Pryma commented: "When the girls were on the track, I was watching how the Ukrainian women in Ruhpolding were doing. They were leading at that moment and it was in some way inspiring for me. Before the last shooting and at the range I was trying not to think about anything else. On the final lap I received the information from the coaches about the lead and I could calmly finish the race."