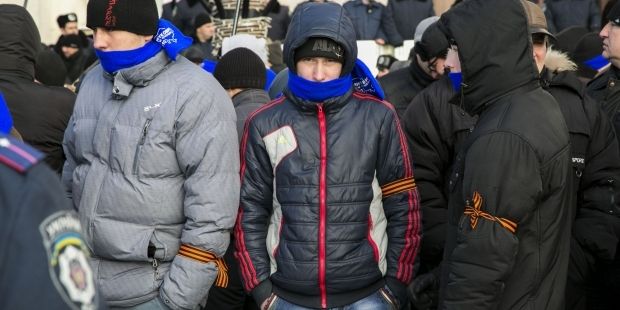 PGO submitted to the court a case on illegal issuance of weapons to "titushky" / visti.ks.ua

"To date, the probe into the illegal issuance of weapons from the Interior Ministry mobilization depots in Kyiv of firearms and ammunition is completed. Nearly 600 of 5.45mm Kalashnikov assault rifles and about 190,000 cartridges was issued. 408 rifles and 90,000 cartridges were handed over directly to “titusky,” the PGO official said at a press conference Saturday, according to an UNIAN correspondent.

According to Horbatyuk, 12 individuals are charged with this crime. Of these, four are held in custody, while the rest are declared wanted. He also noted that three of the detainees are former police officers: Chief of the depot, an inspector, and a technician.

The other eight, including former Interior Minister of Ukraine Vitaliy Zakharchenko, ex-chief of the Kyiv Police Valeriy Mazan, Head of Logistics and others are put on a wanted list. One of Kyiv’s criminal bosses is also wanted along with the officials for extortion of money from the passenger carriers.

Read alsoProbe into crimes against Euromaidan may halt Mar 1 – PGOAccording to the inquiry, on January 20, 2014, the top officials of the Interior Ministry, who closely cooperated with the organizers of “titushky,” ordered the issue of firearms from mobilization depots, which is strictly forbidden in peacetime.

At the same time, Horbatyuk claimed that the issued weapons were not used against the civilians on the Maidan. So far, only a fraction of these weapons, less than a dozen pieces, was recovered by the investigators.