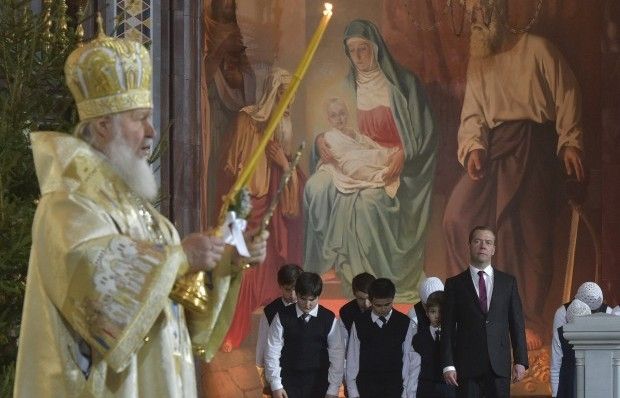 The Synod of UOC-KP expressed outrage, calling the speech of Kirill biased, not objective, filled with references to non-existing or wrongfully presented and distorted facts, the report says.

As the UOC-KP stress, this statement gives the Synaxis participants a wrong idea about the real situation in Ukraine, including the issue of transition of communities from the Moscow Patriarchate under the omophorion Kyiv Patriarchate. "Therefore this statement, being a public false statement that misleads other people, is not worthy of the title of bishop and the position of the Primate of the Russian Orthodox Church that Kirill (Gundyaev) holds," goes the resolution of the Synod of the UOC-KP.

The bishops of the UOC-KP explain this behavior of the Head of the Russian Orthodox Church by the fact that Kirill is dependent on the government of Russia, which, starting from the end of February 2014 has waged the military, informational and economic aggression against Ukraine that is still ongoing, and has occupied Crimea and a part of the territory of Donetsk and Luhansk regions.

Therefore the bishops of the UOC-KP emphasize that "there are objective reasons to believe that the statements and actions of Patriarch Kirill (Gundyaev) of Moscow and of the Moscow Patriarchate on the whole towards Ukraine are influenced by the Russian authorities and are part of their aggressive policy."

"In cases where there is a possibility of a peaceful local settlement of the issue of using the church building and other parish property by means of alternative service of the two parts of the former community of the UOC MP, the central leadership of the Church of the Moscow Patriarchate in Ukraine opposes this idea, deliberately exacerbating the conflict," goes the decree of the Synod.

The UOC-KP reminds that no independent international institution such as the UN, OSCE or other authoritative international organization have proven the accuracy and objectivity of the statements made by the Moscow Patriarchate on the so-called seizure of churches in Ukraine.

The bishops of the UOC-KP once again have testified at the Synod that the "Kyiv Patriarchate continues to urge the leadership of the Church of the Moscow Patriarchate in Ukraine for constructive dialogue in order to develop a clear and acceptable to both parties mode of exercise by believers and their communities of the right to adhere to one or another church guaranteed Laws of Ukraine."

Due to the false accusations put forward by the Patriarch against the Ukrainian Orthodox Church, the Synod of the UOC-KP asks that Ecumenical Patriarch Bartholomew sent an authoritative ecclesiastical commission to Ukraine to further study the case and report to the Local Orthodox Churches.

The UOC-KP stressed: "Given that the Moscow Patriarchate side is a party of the conflict and is depending on the authorities of Russia as the aggressor state and fits under a number of objective accusations, we believe that representatives of the Moscow Patriarchate cannot be included in the said commission, but only may provide testimony and evidence."