Vogue: The Made-in-Ukraine movement is a fashion revolution 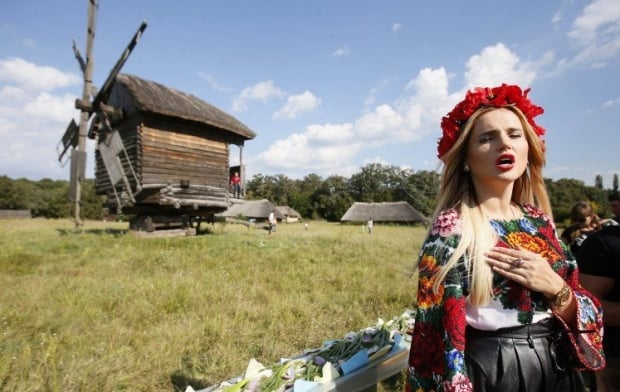 The vyshyvanka is a traditional Ukrainian dress / Photo from UNIAN

"There is an influx of patriotism and homegrown pride that seems to affect the marketing of even the most underwhelming pieces of clothing: Wool socks sold on the side of the street are proudly stamped with phrases like "Made in the region of Zhytomyr, Ukraine," while $3 beanies are emblazoned with the country's coat of arms," Vogue.com Fashion News Writer Liana Satenstein wrote in her article titled "The Made-in-Ukraine Movement Is a Fashion Revolution," published by Vogue.com on February 4.

Every other booth in a bazaar is filled with colorful handmade vinoks, a traditional Ukrainian flower crown. And, of course, everything is "Made in Ukraine," a phrase that has come to hold great symbolism and even inspired its own hashtag — there are over 150,000 results of manufactured goods, from coffee mugs to passport covers, hailing from the country that are currently available for view on Instagram.

The same wave of national pride has hit high fashion, as well. Ukrainian designer Vita Kin shed light on the vyshyvanka, a traditional Ukrainian dress that street style stars scrummed to get into, while Sleeper, a pajama label now sold on Moda Operandi, proudly advertises their Ukrainian roots.

"[Before the Maidan revolution of 2014], people were more neutral and passive toward Ukrainian products," says stylist and journalist Olaa Zhyzhko. "But now, people are more proud. For example, now it became important to support Ukrainian farmers and to buy their food even in posh markets, or to support Ukrainian interior designers and not go to Ikea. Our economy feels difficult now, and one thing became clear: We, the clients, should invest in Made-in-Ukraine labels, which should flourish and gain success, which means designers understood that they should pay more attention to quality and pricing," says Zhyzhko. "After [the] revolution, we've just become more proud of ourselves. That feeling of inferiority has passed away."