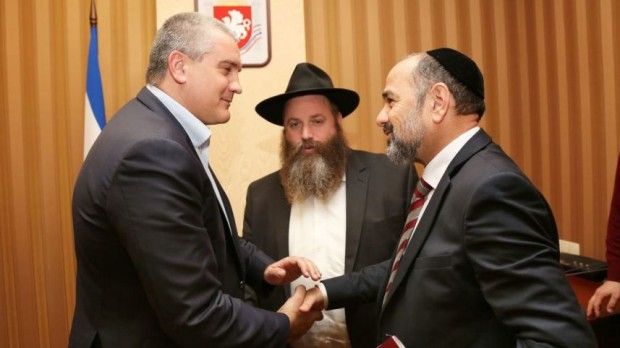 Margi has caused what appears to be an embarrassing diplomatic incident with the government of Ukraine. Taking a highly unusual step on Wednesday, Margi met with the de-facto leader of the occupation authorities of Crimea, Sergei Aksyonov, reads the report.

The Crimean president heads a puppet government established by the Russian government following its annexation of the Crimean Peninsula. Aksyoniov’s government is not recognized by any Western country and contact with it is barred by Ukrainian law.

The Russian government and authorities in the Crimean republic were quick to make use of Margi’s visit and the recognition that he accorded them, publicizing it in the local media as a visit by an official Knesset delegation and representing it as a diplomatic achievement. An article on the website of the official Crimean republic news agency reported that President Aksionov had made it clear to Knesset member Margi that their meeting would help the republic in the diplomatic battle that it has been waging.

Read alsoTASS: French movie star Pierre Richard regrets his Crimean tour cancelledSenior Israeli Foreign Ministry officials said that they had not known in advance about Margi’s visit to Crimea or his meetings with the local authorities there, and had not been briefed on it. Knesset sources noted that Margi’s trip was not an official Knesset visit, and that he had presented it to the Knesset Ethics Committee for its approval as a private visit. In his travel request, Margi had written that the trip was at the invitation of the rabbi of the Crimean city of Sevastopol to tour Jewish institutions in the city. The Ethics Committee approved the trip.

Read alsoProsecutors go after "Putin’s friend" for visiting occupied CrimeaMargi’s trip to Crimea and his meeting with the president of the Republic of Crimea are problematic for two reasons. First, Israel has never recognized the republic and in recent years has tried to remain neutral regarding the confrontation between Russia and Ukraine. Secondly, according to Ukrainian law, Margi committed a criminal act and could be subject to arrest if he were to visit areas controlled by the legitimate, legal government of Ukraine.

“This was not a trip on behalf of the Knesset and the Knesset was not involved in organizing it. Knesset members take work trips at the invitation of various entities," Knesset spokesman Yotam Yakir said.

Just a month ago, the Ukrainian embassy in Israel released a statement warning Israelis against contacts or doing business with the Russian occupation forces in Crimea. In the statement, the Ukrainian government threatened sanctions against individual Israelis and Israeli companies carrying out business activities there.

Read alsoIsrael - Ukraine: Support impossible to ignore. Punctuation matters.The Ukrainian embassy also made it clear in the statement that cooperation with the Russian occupation forces in Crimea was a violation of international law and runs counter to a March 2014 decision by the United Nations General Assembly that emphasized the need to maintain Ukraine’s territorial integrity.

“In the event that such activity continues, the information on the matter will be provided to the relevant authorities in Ukraine to try the violators of existing law,” the statement said. “In addition, the Ukrainian government will consider adding Israeli companies [that cooperate with the Russian occupation of Crimea] to a blacklist of organizations acting in violation of the law and on which sanctions are imposed.”