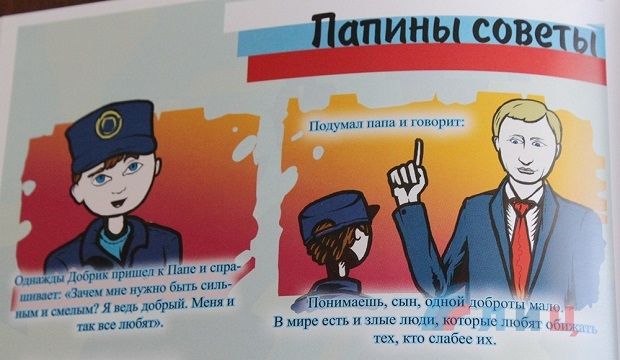 One of the comic's characters is a kind, well-dressed man called Papa who is a dead ringer for Russian President Vladimir Putin / informator.lg.ua

"A ruthless cookie-baking overlord named Fashiston dressed in the colors of the American flag. An evil woman named Gnuland handing out treats to masked men controlled by a pig-headed Ukrainian. And a kind, well-dressed man called Papa who has a striking resemblance to Russian President Vladimir Putin," RFE/RL journalist Tom Balmforth writes in an article titled "Fascists And Evil Americans: Ukrainian Separatists Launch Magazine For Kids," published on February 18.

"Welcome to the fantasy world of Polite Little People, a new monthly kids magazine unveiled on February 17 by Russia-backed separatists in territory they control around Luhansk, in eastern Ukraine," the article reads.

In comments carried by the separatist-controlled Luhansk Information Center and other local news websites, Sergei Kolesnikov, the chief editor of Polite Little People, said his title would help young people's "spiritual-patriotic education," will have a print run of 1,000, and will be sold in kiosks.

"We want our children to grow up to be…people without fear, without reproach, polite, open, defenders of their land, their loved-ones, honest and noble," Kolesnikov was quoted as saying. 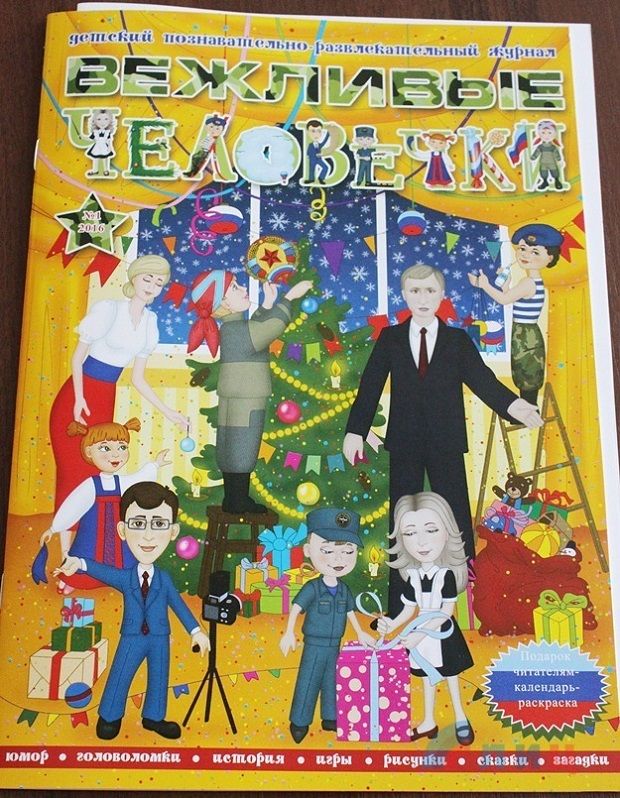 The cover of a separatist-designed magazine for kids, Polite Little People / informator.lg.ua

The name of the magazine, Polite Little People, is taken from the moniker given to the thousands of Russian troops who illegally annexed the Ukrainian peninsula of Crimea in March 2014 with barely a gunshot fired. Statues to them have been erected in Russia and a new memorial is planned in Crimea.

One section of the magazine appears to tell the story of Ukraine's February 2014 revolution by hamming up all the Russian gripes with the West. The West is represented by the character of Fashiston -- an apparent allusion to Russia's assertion that Ukraine's government is fascist – who is dressed in the colors of the U.S. flag. The cartoon zeroes in on U.S. Assistant Secretary of State Victoria Nuland's visit to Kyiv during the Euromaidan protests where she gave out cookies to protesters. 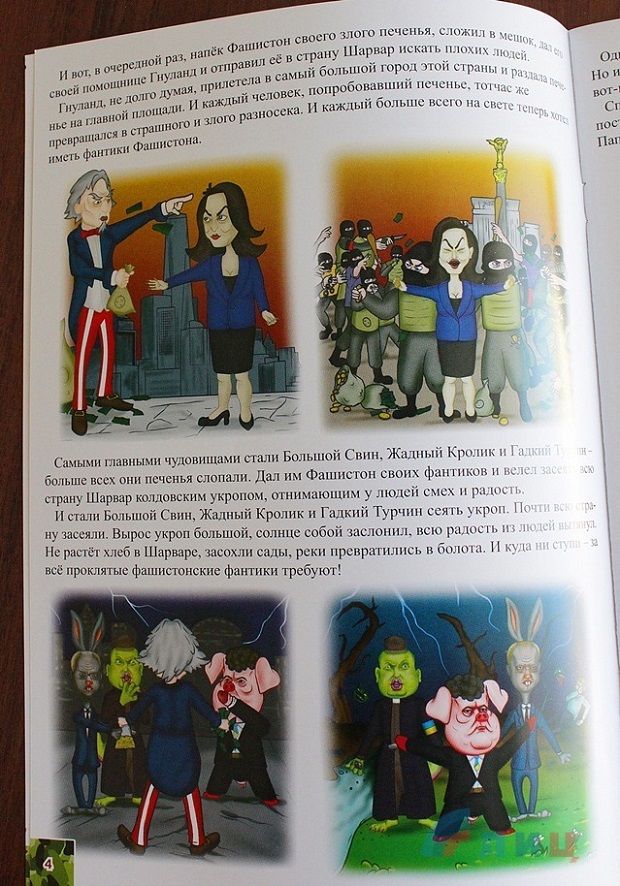 The cartoon zeroes in on U.S. Assistant Secretary of State Victoria Nuland's visit to Kyiv during the Euromaidan protests / Informator.lg.ua

Nuland is nicknamed Gnuland, while the magazine portrays Ukrainian President Petro Poroshenko as pig-headed, draws Ukrainian Prime Minister Arseniy Yatsenyuk as a rabbit with a deathly pallor, and National Security and Defense Council Secretary Oleksandr Turchynov as a green-skinned goblin in priest's garb.

"And so, once again, Fashiston baked his evil cookies, put them in a bag, gave it to his assistant Gnuland and sent her to the country of Sharvar [possibly a derogatory reference to traditional Ukrainian pants] to find bad people."

"Gnuland, not thinking much, flew to the biggest city of this country and handed out cookies on the main square. And every person who tried the cookies at that very moment transformed into a terrifying and evil raznosek [a disparaging nickname evocative of Right Sector fighters].

"The main monsters were Big Pig, Greedy Rabbit, Nasty Turchin -- they gobbled up more cookies than everyone. Fashiston…ordered the whole country of Sharvar to sow magical dill, taking away people's laughter and joy.

"And Big Pig, Greedy Rabbit, and Nasty Turchin began to sow dill. They sowed almost the whole country. The dill grew large, blocked out the sun, and took away people's joy. In Sharvar, bread doesn't grow, the gardens have dried out, the rivers have turned into swamps."

Another section in the magazine is called Papa's Advice.

It features a little boy in a blue cap asking Papa why he has to be strong and bold: "I'm kind. And everyone already loves me."

Papa, who has a striking resemblance to Putin and is wearing a red tie and blue suit, replies with his finger pointing upwards: "Son, you have to understand, kindness alone is not enough. There are evil people in the world as well who like to insult those who are weaker than themselves."

The cartoons have been badly received in Ukraine where the book has been dismissed as sickening propaganda aimed at minors.