Ukrainian TV Channel 24 journalist Volodymyr Runets posted on his Facebook page photos of writing skills tests from an exercise book of a student from the village of Kuchurgan in southern Ukrainian Odesa region, at the border with unrecognized Transnistria. 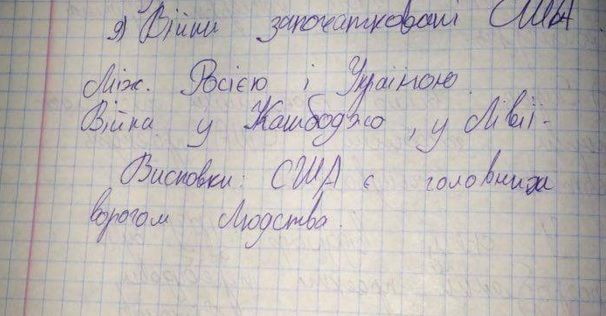 The Ukrainian language exercise book is full of typical messages of the Kremlin's anti-American propaganda, the journalist says.

"In 1919, the United States sent agents in Russia named the Bolsheviks in order to organize a coup d'etat and economic crisis. The United States, as our allies, mobilized troops, when the Soviet army had already entered Germany and had provided food assistance. Everyone who ate canned food was poisoned to death. Nowadays, by all secret, but criminal, means, the U.S. seeks to dominate the world," a student was told to write in his notebook during class.

Read alsoRFE/RL: Ukrainian separatists launch magazine for kidsIn addition, the record says that the United States has launched the war between Russia and Ukraine, as well as wars  in Cambodia and Libya.

"The conclusion is that the United States is the main enemy of mankind," the record ends with this phrase.

Read alsoTuka outraged at Kremlin using Donbas children in propaganda schemesAccording to the journalist, the residents of this village loathe Ukrainian patriots, and most of school teachers deliberately keep silent about those who actually kill their fellow Ukrainian citizens in the east of Ukraine.