Darijo Srna marked his record-breaking 486th game for Shakhtar with a goal and two assists as the Ukrainian side marched into the UEFA Europa League semi-finals, according to an announcement on the UEFA official website. 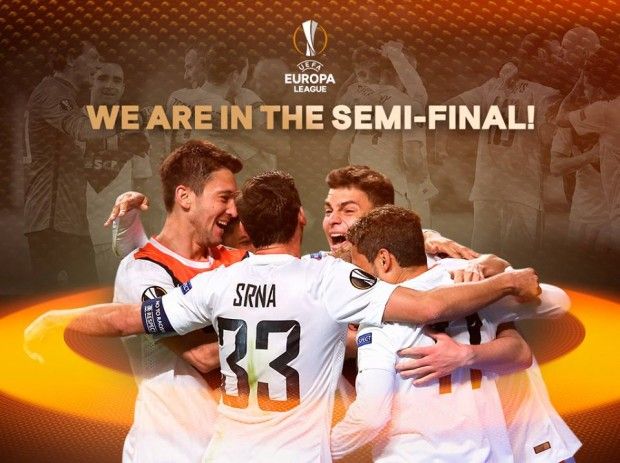 The Thursday game between Shakhtar Donetsk and Braga ended with a 4-0 score (agg: 6-1), UEFA wrote.

A giant banner featuring the Croatian's No. 33 shirt greeted the teams' arrival on the pitch and he loomed just as large throughout the second leg. It was Srna who made it 3-1 on aggregate from the spot and then, either side of half-time, he had crosses turned in by the helpless Ricardo Ferreira and the lively Viktor Kovalenko.

It left Braga needing to score four without reply – more than they had managed in five precious away games in the competition this season. Yet it was the Portuguese side who had begun brightest, looking the more likely scorers before Marlos's through ball somehow found Kovalenko and the playmaker drew a foul from Matheus.

The keeper guessed the correct way but Srna's shot was too well-struck. Game over. Facundo Ferreyra's delicate chip was denied by the upright but it merely prolonged the inevitable – not for long. The unfortunate Ferreira, unable to get out of the way when near namesake Ferreyra missed from point-blank range, did that.

Read alsoSchalke out of Europe after Shakhtar lossKovalenko added the gloss for Shakhtar; another Ferreira own goal 16 minutes from time compounded Braga's woe.

Who else? On his record-breaking appearance for Shakhtar, the right-back scored the goal that all but decided the tie, showing trademark cool from the penalty spot – goal No48 for the club. It was just the start. Ever dependable at the back, Srna's crosses still carry the same fizz as ever and created two more goals. Now in his 13th season with the Pitmen, the 33-year-old is as ingrained into the fabric of the club as the orange miner's hat.

How far can Shakhtar go?

Mircea Lucescu warned that Shakhtar's failure to see out a 2-0 win last week had left them in a "dangerous situation", but the spectre lurked only briefly in Lviv. When they are on their game, the Pitmen are difficult to handle, attacking with alacrity. A habit of conceding late goals has hampered them of late, contributing to a five-point deficit on Dynamo Kyiv in the league, but a clean sheet tonight was almost as important as the four at the other end.