The SBU Security Service of Ukraine has announced that together with the prosecutor's office they arrested upon receiving a bribe the mayor of one of the district centers of Kyiv region, as well as five of the briber's accomplices. 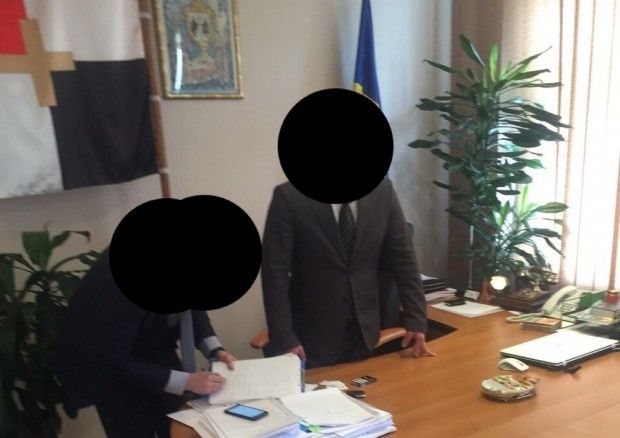 According to the SBU's press center, the blackmailer demanded EUR 1 million from a developer company official for non-termination of a land lease contract and securing further construction of an apartment complex from any administrative obstacles.

Four mayor mediators were detained by law enforcement officers in the center of Kyiv, when they put the first part of a bribe of EUR 200,000 in the account of the mayor in one of the banks.

Another accomplice was detained by the SBU officers in one of the restaurants, when a representative of the developer handed him the documents on property rights for non-residential real estate with a total area of 2,800 square meters worth EUR 700,000.

Read alsoFines for bribery smaller than bribes in Ukraine: Transparency IntlThe SBU officers detained Vyshgorod Mayor in his office after the transfer of money and documents.

In turn, the prosecutor's office of Kyiv region has published photos of the arrest.

Read alsoNABU fails to detain bribe-taking judge who flees while shooting (Photo)Criminal proceedings have been initiated under Part 4 Article 368 of the Criminal Code of Ukraine. Urgent investigative actions are underway.

Oleksiy Momot is Vyshgorod Mayor, who ran for the post from the Volia party in the elections of 2015.