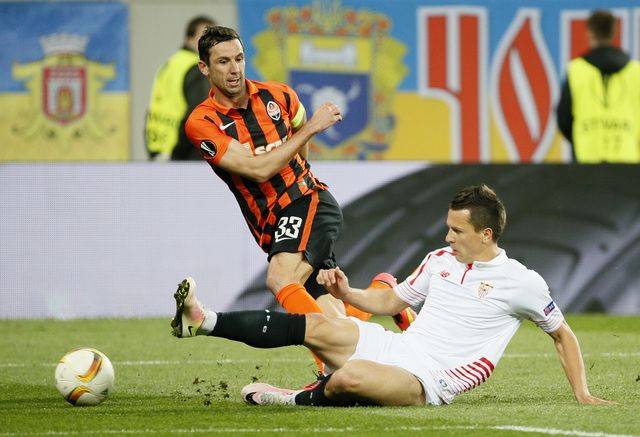 Sevilla, winners of the tournament in 2014 and 2015, led early on through Vitolo's close-range strike, BBC Sport reported.

Marlos equalised with a composed finish from 18 yards before Taras Stepanenko headed the Ukrainian side in front before half-time.

But Kevin Gameiro's late penalty earned the Spaniards a draw.

The French attacker showed no signs of nerves, converting confidently from the spot after Facundo Ferreyra fouled Vitolo just inside the area.

The result leaves Sevilla on course for a third consecutive Europa League success, with the two away goals making them firm favourites to advance to the final in Basel.

No team has won three consecutive European titles since Bayern Munich achieved the feat 40 years ago, and if Unai Emery's side progress from next Thursday's second leg in Spain, only Liverpool or Villarreal stand between them and a piece of history.

Read alsoSevilla defend their Europa League crown with 3-2 victory over DniproSevilla have not won away from home all season in this competition and have managed just one victory on their travels in La Liga, so a draw in Lviv represents a fine achievement.

But their home form is excellent – they have won 14 of 18 league games at their Ramon Sanchez Pizjuan Stadium – meaning their bid to become the first team to win the Europa League three times in a row remains very much alive.