Ukrainian activists have been blocking Opposition Bloc leader Yuriy Boyko and Opposition Bloc member, oligarch Vadym Novinsky, who have arrived in Odesa, which is marking the second anniversary of the tragic events today. 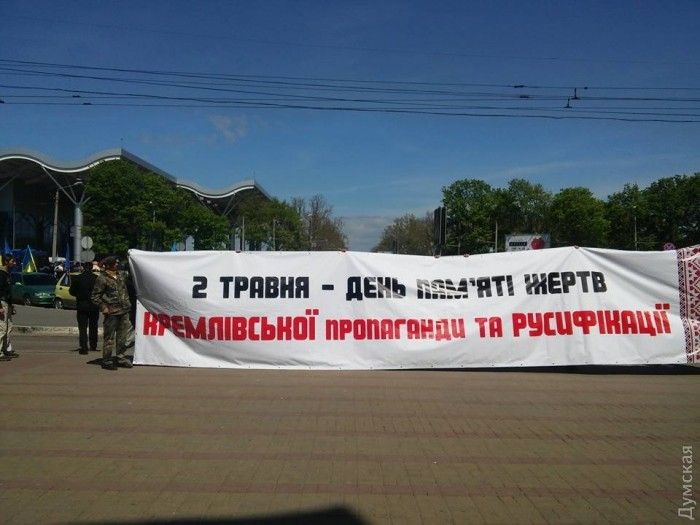 Pro-Ukrainian organizations have gathered in Odesa on Monday / Photo from dumskaya.net

"Boyko and Novinsky have arrived at Odesa airport and are now in the VIP lounge. Patriots do not let them out and demand that [they] leave the city," C14 news, the news page of the C14 nationalists' movement, reported on Facebook on Monday.

"It is calm in Odesa streets now, but it's getting hot at the airport," it reported.

"At the moment, NGOs Self-Defense of Odesa's Maidan, Vilni Lyudy (Free People), Automaidan and Right Sector are blocking Odesa airport, where MPs from the Opposition Bloc Boyko and Novinsky are. Police officers and titushkis [hired thugs] have been brought to the [airport's] building," it said in an update.

The activists claim that "the titushkis are going to break the patriots' blockade."

While commenting on the arrival of some Members of Parliament from the Opposition Bloc in Odesa on May 2 for participation in a rally on Kulykove Pole Square where the incident took place two years ago, Saakashvili said that agents provocateurs would try to use politicians, the victims and their family members as screening.

Saakashvili said that no one can bar anyone from arriving and expressing their own point of view, however, it is unacceptable when politicians use the incident as a publicity stunt.

"Let it be on their conscience," he added.

He also said hundreds of people had died and might die in Donbas because of "such provocations."

"We are not that naïve to let foreign special services stage such an operation in Odesa," he added.

Over 3,000 law enforcement troops have already arrived in Odesa to maintain law and order in the city during the festivities. Rescue teams, paramedics, security service, police and border officers have been working in special security regime.