Shelling of home in Donbas: Lack of evidence, ECHR says

The European Court of Human Rights (ECHR) has declared that complaints concerning the shelling of homes in eastern Ukraine are inadmissible due to the lack of evidence, according to an UNIAN correspondent. 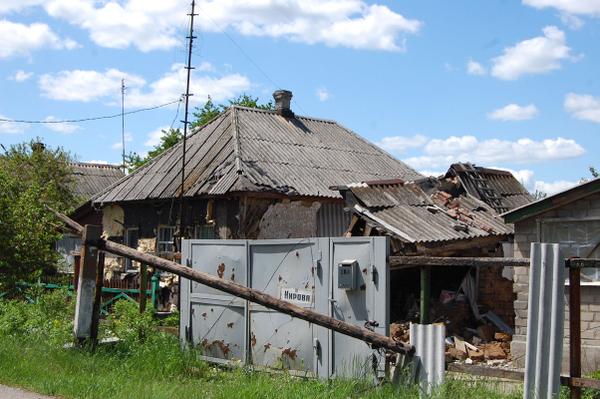 The applicants say the shelling of the villages where they lived damaged or destroyed their property / Photo from twitter.com/Debaltsevo_UA

"In its decision in the case of [Mr] Lisnyy and Others v. Ukraine and Russia (application nos. 5355/15, 44913/15 and 50853/15), the European Court of Human Rights has unanimously declared the applications inadmissible. The decision is final," the ECHR said in a statement on July 28.

"The case essentially concerned three Ukrainian nationals, who complained that their homes were shelled during the hostilities in eastern Ukraine from the beginning of April 2014 onwards," the statement said.

The court found that the applicants, who only submitted their passports as evidence, had not sufficiently substantiated their complaints.

Read alsoFour civilians wounded in shelling by Donbas militants in past two daysIt reiterated that, generally, if an applicant did not produce any evidence in support of their cases, such as titles to property or of residence, his or her complaints were bound to fail.

The applicants are Anton Lisnyy, Svetlana Piven and Volodymyr Anokhin, three Ukrainian nationals, born in 1984, 1946 and 1957, respectively. From the beginning of April 2014, armed pro-Russian groups began seizing official buildings in the east of Ukraine, also announcing the creation of the so-called "Donetsk and Luhansk People's Republics." In response, an "anti-terrorist" operation was announced by the newly-set up Ukrainian government.

Read alsoPoroshenko: Donbas invaded by intrudersIn this context, Lisnyy's house in Donetsk region was destroyed during shelling in August 2014; Ms Piven's house, also in Donetsk region, was damaged, having been under shellfire since April 2014; and Mr Anokhin's house in Luhansk region was also damaged, having been under permanent shellfire since the summer of 2014. As evidence, all three applicants submitted copies of their passports, photographs of a destroyed house (Lisnyy) and copies of reports on the general situation in eastern Ukraine (Piven).

Read alsoHuman rights activists collect evidence of Donbas shelling from Russian territoryThe applicants complained that the shelling of the villages where they lived had put their lives at risk and destroyed or damaged their property. In addition, the applicants had a general complaint that all the State institutions in eastern Ukraine, including the courts, had suspended their operations and relocated to areas controlled by the government of Ukraine. They relied on Article 1 of Protocol No. 1 (protection of property), Article 2 (right to life), Article 6 Paragraph 1 (right to a fair trial) and Article 8 (right to respect for private life), as well as Article 10 (freedom of expression) and Article 13 (right to an effective remedy) of the European Convention on Human Rights.

According to the statement, in addition to the three inter-State applications, approximately 3,000 individual cases related to the events in Crimea or the hostilities in eastern Ukraine are currently pending before the court. These cases will not be put on hold and will continue to be processed on a case-by-case basis.