Communist regime fought against Holodomor in Ukraine with resolutions

Russia declassified some documents about the hunger in USSR in 1930-1940ies, which took place because of the collectivization of farms and industrialization, in particular, in Ukraine, Kazakhstan, Belarus, and Ural.

Copies of the declassified documents were posted at the official web site of the Russian Foreign Affairs Ministry.

The declassified documents indicate that, beginning from May of 1930, the Central Committee of the All-Union Communist Party of Bolsheviks (VKP(b)) received information about hunger, deficit of grain and bread from Senior Political Departments of Soviet Union republics. On the basis of the received information, the Political Bureau of VKP(b) issued resolutions on aid to suffering regions almost every day. Thus, as for Ukraine, they made decisions to give help with seeds, to lift reservation on rye flour and to buy additional grain from eastern regions, etc.. 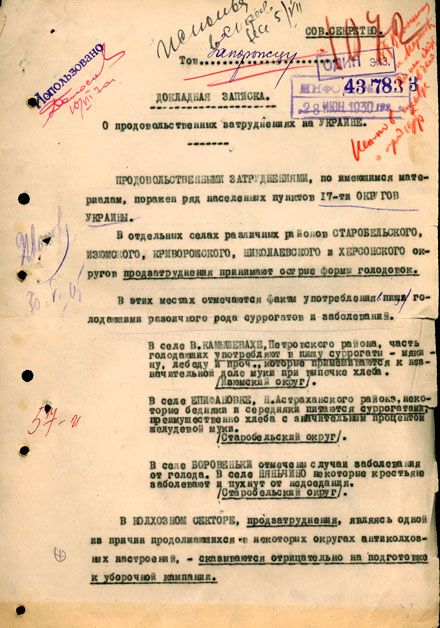 On the other hand, the official web site of the Russian Foreign Ministry posted materials showing inactivity of the Ukrainian party leadership in solving the food crisis in the republic. In particular, M.Zhyvanov [his position is not specified - UNIAN], wrote in his letter to Stanislav Kosior, first secretary of the Central Committee of the Communist Party in Ukraine: “Open your eyes to the reality. What are you doing with your policy, you, silent slaves of Moscow? You have ruined Ukraine and its agriculture within two years: you turned the Ukrainian party organization into a flock of parrots, who have learnt that it’s forbidden to say “unreal”, it’s opportunism. Last year these parrots left the Ukrainian economy without any slice of bread, without potato, without corn. At least, calculate, how many children and aged people have died from hunger here. At least you could show courage and calculate those victims, and familiarize Moscow with the results of our carefree and irresponsible “struggle for socialism”.

At the same time, a report from Mendel Khatayevych, Secretary of the Central Committee of the Ukrainian Communist Party, sent to the VKP(b), reads about a rise of epidemics in Ukraine, as of January 2, 1933:

“A rise of epidemics, in particular, typhus, has been recorded in Ukraine. The total number of cases for the whole year 1931 made up 8 thousand 384, during January-November of 1932 – 15 thousand 458”, M.Khatayevych wrote.

As early as on March 17, 1933, the secret political department of the United State Political Directorate prepared a special report about hunger in the Ukrainian SSR, with indicating cases of mass death and cannibalism. “Volodarskiy district of the Kyiv Oblast. In Rude village, a mother left her three children home alone. Having absolutely nothing to eat, a 9-year old boy, together his elder sister, killed their 3-year old younger sister. The children cut off her head and began to eat the raw meat of the dead body”, the special report informs.

Very many such cases were listed in numerous reports from different regions of Ukraine.

The Russian Foreign Ministry informs that the publicized digital copies of original documents were received from funds of Russian federal archives. “These are just a part of a huge documental array about the hunger in USSR”, reads the preface to the declassified materials.