Ukraine police on hunt for criminals who vandalized synagogue in Uman 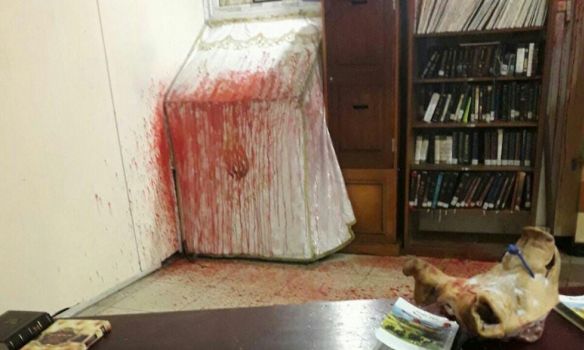 A group of unknown persons broke into the synagogue, dispersed the crowd and defiled the premises, pouring red paint across the floor and walls and leaving a pig's head, according to various Ukrainian and foreign media.

"Immediately after Israel voted for the UN resolution on Crimea, where Russia is recognized as an invader, and Ukraine as an affected party, there comes the attack on the synagogue in Uman. This is done in such a showing way and so clumsily, in order to spark negative reactions in Israel and the West, raise a wave in the media about anti-Semitism in Ukraine, and there is no question who has ordered this act," Ukrainian MP Boryslav Bereza wrote on Facebook.

Read alsoIsrael appeals to Ukraine MFA due to anti-Semitism in broadcasts from annexed Crimea"The relationships between Israel and Ukraine are now at a very good level. And it is absolutely clear that Russia does not like it. As soon as we begin to improve relations with Israel, there comes another provocation with an anti-Semitic tinge."

"Now is the time, when it is necessary not only to condemn this, but also to stop it. As the first deputy head of the inter-parliamentary group for relations with the State of Israel, I'm taking this under my control. Provocateurs and vandals should get deserts," he said.

At the same time, Acting Head of the National Police Vadym Troyan said the law enforcers have formed a special investigative team to find the perpetrators responsible for desecrating the grave of Rabbi Nachman.

When identified, the suspects face up to eight years in jail for committing the antisemitic act.