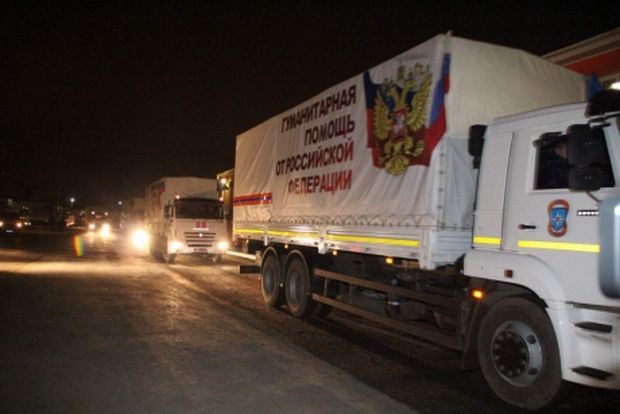 "This convoy differs [from the previous ones] as it included an NBCRV, which cannot be part of humanitarian cargo," the service said.

The trucks of the convoy were moving in violation of international and domestic laws and were not in line with the modalities agreed with the International Committee of the Red Cross. Ukrainian inspectors could only examine the cargo without performing control functions.

"All in all, 15 vehicles of the so-called 'humanitarian' convoy passed from 05:50 to 06:30 through the Russian-based Matveyev Kurgan checkpoint to enter Ukraine. The trucks were said to be loaded with food," it said.

Read alsoRussian 'convoy' took away 40 bodies of Russian soldiers - Ukrainian intelligenceThe second part of the convoy had to enter Ukraine through the Russian-based Donetsk checkpoint.

Read alsoAnother Russian "humanitarian convoy" invades UkraineRussia began sending its "humanitarian" convoys to occupied Donbas in August 2014. Ukrainian customs and border officers have been unable to properly inspect the cargo. The Ukrainian side claims it has proof that weapons, ammunition, anti-tank grenades have been transported together with freight for civilians.