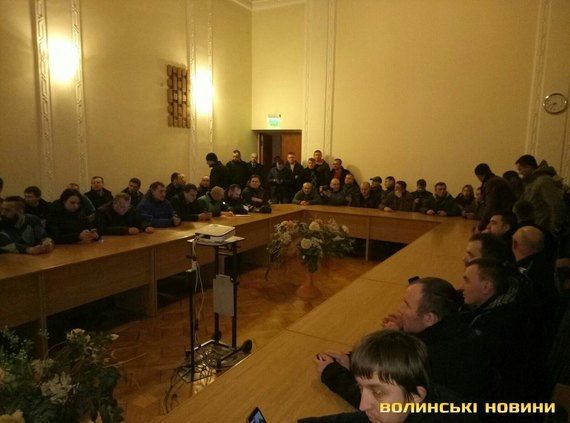 Protesters in Lutsk say their protest may be extended to two or three days / Photo from volynnews.com

Over 80 war veterans and other activists in Volyn region have responded to Lutsk City Council member Mykola Sobutsky's appeal on Facebook and gathered outside the Volyn regional administration's building, according to an UNIAN correspondent.

The protesters demand that the regional authorities and police explain why the roadblock near the Kryvy Torets railway station in Donetsk region, one of the roadblocks set up by activists who protest against trade with Russia-occupied areas in Donbas, was stormed by the SBU Security Service and SWAT police on Monday.

Later, the protesters read out their demands, addressing Ukrainian President Petro Poroshenko and the Ukrainian parliament, according to 112.ua.

Their demands include the release of the unlawfully detained participants in the blockade and the dismissal of Ukrainian Interior Minister Arsen Avakov and his controversial subordinate, deputy head of the National Police of Ukraine Viacheslav Abroskin. They also insist on the dismissal of SBU head Vasyl Hrytsak and chief of the SBU's Anti-Terrorist Center Vitaliy Malikov.

What is more, they demand urgent measures to facilitate the release of prisoners of war kept by Donbas occupiers and the immediate adoption of a No. 3181 bill on temporarily occupied areas.

The protesters said they could stay in the government building overnight. Their protest may be extended to two or three days if needed.

Read alsoPolice detain 43 men for blocking Kryvy Torets railway station in DonbasAs UNIAN reported earlier, police on March 13 detained 43 men who were blocking traffic near the Kryvy Torets railway station in Donetsk region. The detainees, being officially accused of firearms possession, which is banned in the Anti-Terrorist Operation zone in Donbas, were taken to police stations for interrogation, according to the media liaison office of the Ukrainian Interior Ministry.

The headquarters of the so-called "Blockade Against Trade with Occupiers" said earlier on March 13 that the Ukrainian activists who were detained at the Kryvy Torets railway station had been taken to police stations.

Member of Parliament Ihor Lutsenko from the Batkivschyna parliamentary faction said that Ukrainian law-enforcement agencies had detained about 30 participants in the trade blockade. Earlier, the blockade HQ claimed that SBU security service officers and members of the Ukrainian police's KORD special weapons and tactics force had taken the Kryvy Torets roadblock over.

This statement appeared after adviser to the SBU chief Yuriy Tandit told UNIAN that the SBU was not involved in the seizure of participants in the blockade in Kryvy Torets who oppose trade with Russia-occupied areas in Donbas.