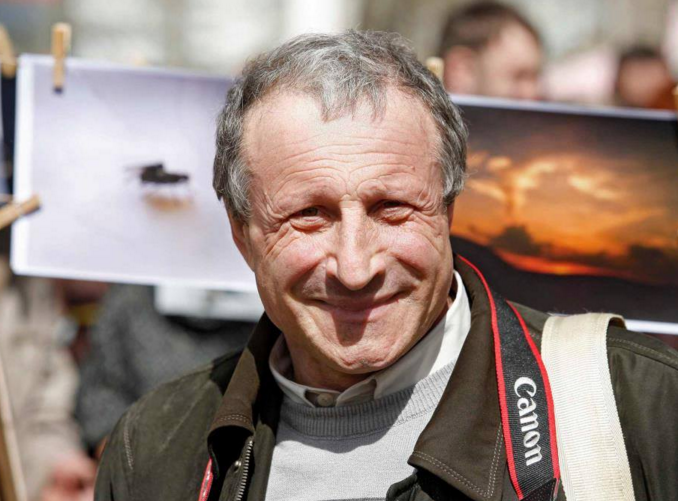 Shortly after it got under way, the presiding judge halted the proceedings following a defense request for a more open and accessible process by holding the trial in a larger courtroom, RFE/RL reported.

Semena, an RFE/RL contributor, is being prosecuted for an article he wrote criticizing Moscow's seizure of the Black Sea peninsula from Ukraine in 2014 and expressing support for a blockade of the territory initiated by Ukrainian activists.

The trial at a Russian court in the Crimean capital, Simferopol, began amid mounting international pressure on Moscow to drop the case against Semena, 66. He faces up to five years in prison if convicted.

The charges stem from a 2015 article he wrote for RFE/RL's Krym.Realii (Crimea Realities) website that Moscow-installed authorities in Crimea allege called for the violation of Russia's territorial integrity.

The column was part of a wide-ranging discussion on the website about options for Crimea and was a response to an earlier column that opposed a blockade.

Outside the court on March 20, Semena, who is barred from leaving Crimea and must request permission to travel outside Simferopol, said that he was not guilty and that the article he wrote does not include calls for the violation of Russia's territorial integrity.

"Crimea's status is in dispute," he said.

Read alsoPACE passes Ukraine-proposed resolution demanding that Russia release political prisonersThe start of Semena's trial followed a European Parliament resolution calling on Moscow to free more than 30 Ukrainian citizens who are in prison or face other conditions of restricted freedom in Russia, Crimea, and parts of eastern Ukraine that are controlled by Russia-backed separatists.

The nonbinding resolution urged Russia "to allow all the above-mentioned people to travel freely, including Mykola Semena, who is being prosecuted for his journalistic work for Radio Free Europe/Radio Liberty."

Washington has also called on Russian authorities "to drop spurious charges against Mr. Semena and release him and all other Ukrainians held by Russia for political reasons."

Ten members of the U.S. Congress have signed a letter urging prosecutors to drop the charges, which they said appeared to be "part of a concerted effort by Russian and Russian-backed authorities to clamp down on independent media."

Read alsoKremlin dubs Crimean journalists, activists as 'terrorists'Russia seized control of Crimea in March 2014 after sending in troops without insignia, engineering a takeover of the regional legislature, and staging a referendum that was swiftly dismissed as illegitimate by Ukraine, the United States, and a total of 100 countries in the UN General Assembly.

Moscow has portrayed its takeover of Crimea as necessary to protect ethnic Russians and other residents of the peninsula from oppression by pro-Western officials that took power in Kyiv following the 2014 ouster of former Ukrainian President Viktor Yanukovych.

That narrative has been rejected by Ukraine and Western governments, which accuse Russia-backed authorities in Crimea of rights abuses against Crimean Tatars and others opposed to Moscow's rule there.

Natalya Poklonskaya, the former Russia-installed prosecutor-general in Crimea who filed the charges against Semena and who now serves in the Russian parliament, has accused RFE/RL's Krym.Realii of providing "justification for acts of sabotage and extremism" and inciting "ethnic hatred."

If you see a spelling error on our site, select it and press Ctrl+Enter
Tags:News of UkraineRussiaCrimeaSemena