Starting from their first grade, children in Luhansk learn the history of "LPR" group, which Ukraine has recognized as terrorist organization, Donbas Realities reported.

As early as the fifth grade, they might be even given an opportunity to hold automatic rifles.

"Terra incognito," or “pure land” in Latin – this is how psychologists characterize a child's brain. Kids cannot independently analyze incoming information. Leaders of "LPR" and "DPR" terrorist organizations seem to be well aware of this fact, as they start molding childrens’ perception of the ongoing events since kindergarten.

In local propaganda news, they show the Russians bringing toys to Luhansk children. However, among these toys there are toycars with the marking of the Russian army.

The news crew shows kids singing a song to their guests as sign of gratitude, just as their supervisors have taught them. A nice melody can’t hide the haunting lyrics, calling their peers to “march” and “join the army".

Read also DPR militants teach children to handle weapons: Ukrainian delegation at UN Security Council Sophisticated political technology affects the youngest. One of the stories in a children's magazine tells of some evil people called “raznoseki” (a reference to a colloquial term “pravoseki” describing a member of Ukraine’s Right Sector organization, labeled in Russia as extremist) stealing black gold (oil) on the orders of an evil "pig" (a villain in a picture is a caricature of Ukraine’s president Petro Poroshenko, along with two other well-recognizable figures from Urkaine’s political elite – former PM Arseniy Yateseniuk and NSDC Secretary Oleksandr Turchynov), and planting the valley with "malicious dill" (a reference to “Ukrop” – derogatory term used to describe Ukrainian troops, which also literally translates into English as “dill”). But the “good” characters with “polite little men” have turned a valley into a boiling pot where all the dill was boiled. 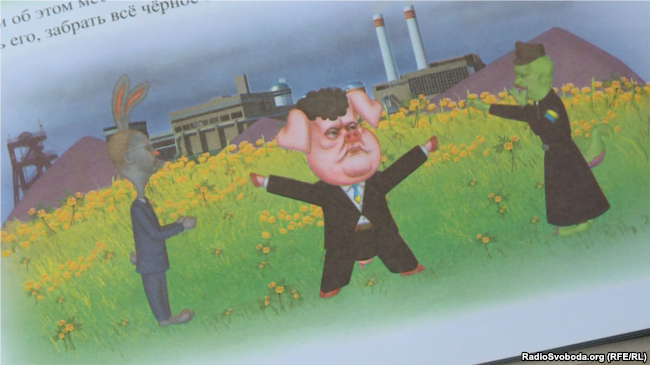 "If properly prepared, they could be turned into terrorists, like in the Islamic State. We see how those children are being educated now, and later they might as well be taught how to kill an “ukrop” or blow up a bridge. Accordingly, we will see this in real life and it will be difficult to deal with these people," says Denys Bohush, a political scientist.

Read alsoChristmas postcards for Ukrainian soldiers on front line"LPR" and "LPR" have a good “teacher” as these technologies have long been worked out in the neighboring state, Russia, with an overwhelming praise for Vladimir Putin being promoted in educational facilities across the country.

If you see a spelling error on our site, select it and press Ctrl+Enter
Tags:News of UkrainewarDonbasUkraineterrorismpropagandachildren