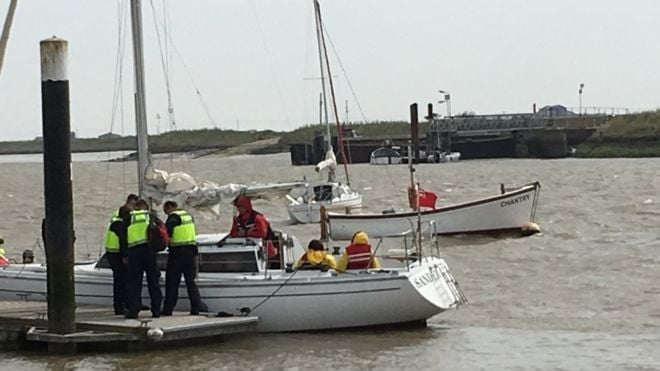 The UK Coastguard, RNLI lifeboat crews, Suffolk police and UK Border Agency were all called to the scene on the banks of the River Ore, at Orford, as reported by Ipswich Star.

Seven people, thought to of Ukrainian nationality, were arrested by the border force and have been detained at local police stations.

The incident took place between 11.45am and 1pm on Sunday, with a 28-foot sailing yacht reported to be struggling in strong winds.

The coastguard contacted the RNLI, who sent Aldeburgh's all weather and inshore lifeboats.

A spokesman for the RNLI said: "On arrival at the scene, the ILB (inshore lifeboat) crew discovered that the yacht was inside the river mouth and was in danger of running aground again, after it had initially managed to refloat."

"Communication was difficult due to language barriers, but a tow was eventually secured and the casualty taken to Orford Quay."

"The yacht was handed into the care of HM Coastguard Shingle Street, in addition to the Border Agency."

Read alsoGerman textbook for migrants shows Crimea Russian territory (Photo)A spokeswoman for the Home Office said: "Border Force and Suffolk police were contacted at 11.45am regarding a boat stuck in the River Ore. The coastguard intercepted and towed the vessel to safety."

"Border Force officers were deployed in conjunction with Suffolk police and seven individuals were arrested in relation to immigration offences."

"All have now been taken to local police stations and will be subject to interview."

It is the second time in recent months that a group of people have been detained after landing on the Suffolk coast.

In September 2016, a group of six people landed at Bawdsey Quayside, later fleeing from a pub before being caught.

In October 2014, an Ipswich Crown Court hearing gave some insight into the problem when it emerged organized criminals had attempted to smuggle Eastern European people into the country, coming ashore at Orford under the cover of darkness.

Oleksandr Kozak, one of the three Ukrainians who pleaded guilty to conspiring to facilitate a breach of the UK's immigration law, told officers he had done the run from London to Orford on seven previous occasions.