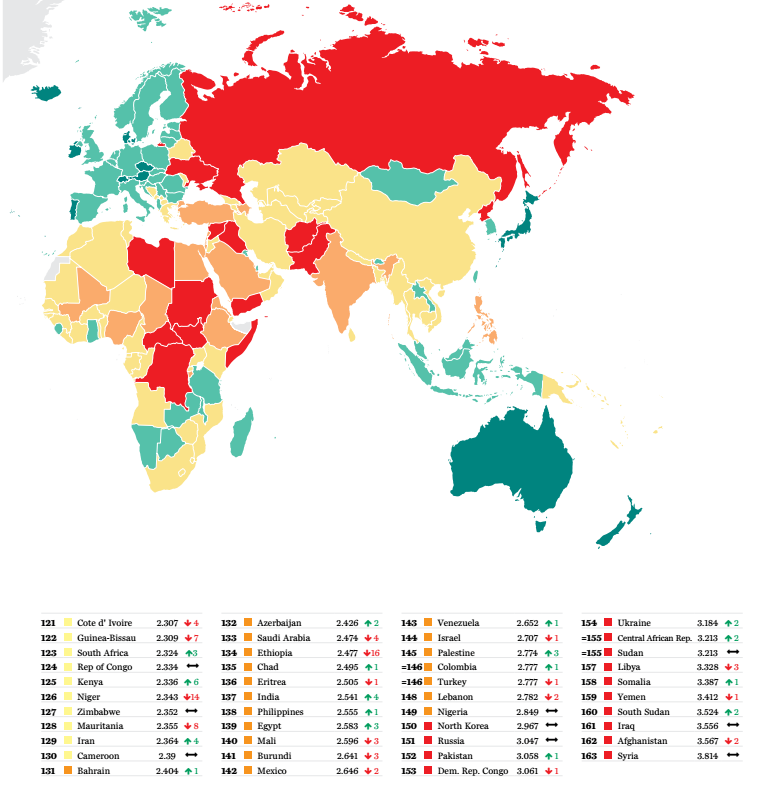 "Ukraine, for example, saw improvements in scores for financial contributions to UN peacekeeping missions, number, duration and role in external conflicts, likelihood of violent demonstrations and impact of terrorism; however, the underlying factors that could lead to the re-emergence of large-scale military conflict have not dissipated. Society, especially near the war zone, has become more militarised, and the military more politicised, while separatist-held areas saw a large number of assassinations of high-profile commanders," the report said.

However, Russia whose aggression Ukraine has been encountering since 2014 ranks 151st, according to the ranking.

Read also2017 World Press Index: Ukraine ranks 102nd, up 5 spots"The 2017 GPI recorded a slightly more peaceful world, in spite of the ongoing conflicts in the Middle East, terrorism in Europe, and rising geopolitical tensions between Russia and the U.S. The average level of country peacefulness improved by 0.28 per cent when compared to the 2016 GPI," the report described the change during the year.

Iceland became the most peaceful country, it has been taking this position since 2008. New Zealand took the second place this year, followed by Portugal. Austria, Denmark and the Czech Republic came next.

The authors of the ranking took into account the economic and political stability of the states, observance of human rights, terrorist threats and armed conflicts, the report said.