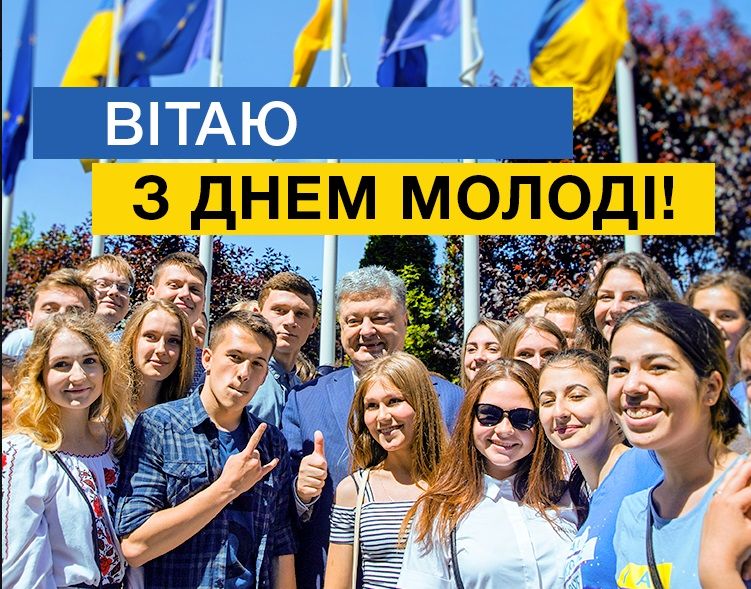 "Today is a day of great hopes and expectations. Not long ago, the Ukrainians were granted visa-free travel to the countries of the European Union, having removed the barriers separating Ukraine from Europe. I am sure that without your resolute and uncompromising struggle for the European choice this day would never have come," the president said on Youth Day on Sunday, June 25, addressing the young people of Ukraine.

According to him, young men and women with great patriotism, energy and kind hearts are heroically defying evil and injustice.

The president says he is proud that young people have always stood in the vanguard of historical changes, the struggle for Ukraine's independence – from the Kruty Heroes [500 cadets who died defending Kyiv at the Battle of Kruty delaying the advancement of Bolshevik Red Army in January 1918] to the first students in tents during the so-called Revolution on Granite (October 1990), from the Orange Revolution (November 2004) to the recent Revolution of Dignity, also known as the Euromaidan, the Heavenly Hundred Heroes and defenders of Donetsk airport, dubbed "cyborgs."

Read alsoTwo Russians among members of sabotage group destroyed by Ukraine troops in Donbas"Now the best Ukrainians – soldiers of the Armed Forces and other military formations – are defending the will and freedom in the east of the country," he said.

"I believe that Ukraine will never wander from the track of democracy because a new generation has been tempered – a generation of free people," Poroshenko stressed.

He wished everyone good, inexhaustible creativity and vitality.

Ukraine marks Youth Day on last Sunday in June. The day was introduced in June 1994.

If you see a spelling error on our site, select it and press Ctrl+Enter
Tags:News of UkrainePoroshenkoyouth