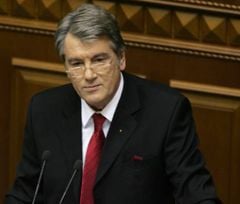 President of Ukraine Victor Yushchenko, in accordance with part 3, article 6 of law “On Struggle Against Corruption”, published information about incomes, securities and property which belong to his family and him.

According to the President’s Internet portal, the income statement will be published in Uryadovyi Kurier and Holos Ukrainy dailies on March 31.

According to the portal, last year the Ukrainian President’s revenue totalled UAH 1,041.060 thousand, including dividends, interests, royalty of UAH 549.040, and salary of UAH 492.020.

In 2008 the President did not receive any revenue from business and independent professional activity or from disposal of capital issues and corporate rights.

It is said in the income statement that V. Yushchenko owns a ZAZ-965A car and a HARL.DAV motorcycle. Members of his family do not own any vehicles.