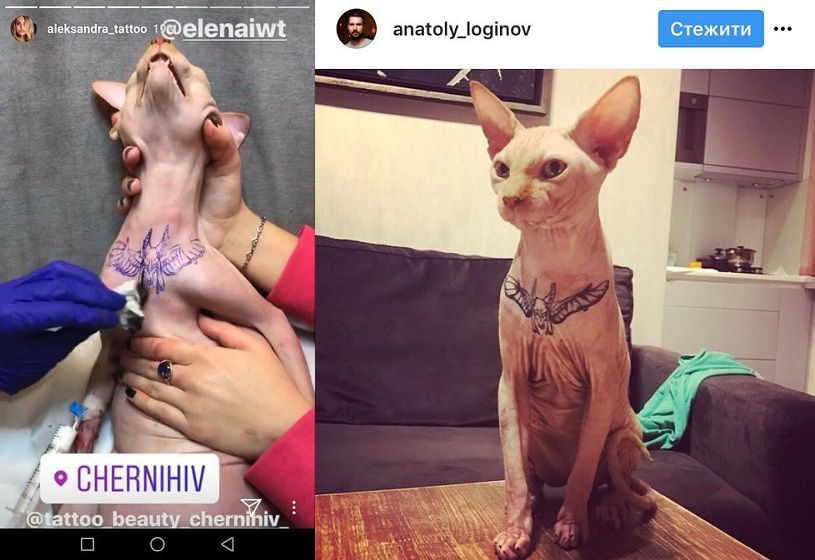 Images taken show Yasha the cat knocked out under anaesthetic. A tattoo artist then works on inking the pet, with the design taking up a large space on the animal's upper body. But after posting the photos on social media, Ivanickaya was hit by dozens of messages from followers who accused her of torturing the cat, Metro wrote.

One said: 'Would be better to ink her forehead with a tattoo saying "Idiot" and break her finger for torturing a defenceless animal, poor kitty. Another said: 'You just can't torture those who are weaker then you, it is not a toy, it is a living being. She did not put a tattoo on her chest.'

One added: 'You really are ugly on the inside if you can't see that tattooing your pet is cruelty and inflicting pain. Hell is waiting for you.'

Read alsoKyiv may get animal cops unitIvanickaya later hit back at the comments, stating that the pet 'has it's own Instagram and eats oysters.'

According to MailOnline, she added that the cat 'leads a better life' than those outraged by the clip, and that the cat 'was not harmed' by the experience.

She said: 'This cat's life is better then yours. Maybe it is hell for you, but he feels just fine. 'He has not been castrated and he never will be, this would be real cruelty. I checked with the vet before getting him a tattoo and they were fine with it and a vet was present while they were doing the tattoo, so everything was under control.

'He is very smart and enjoys his happy life. The tattoo was made on the upper layer of skin.'

Police spokesman Natalia Chovpylo said: 'If we establish that the animal was tortured, we will open a criminal case.'