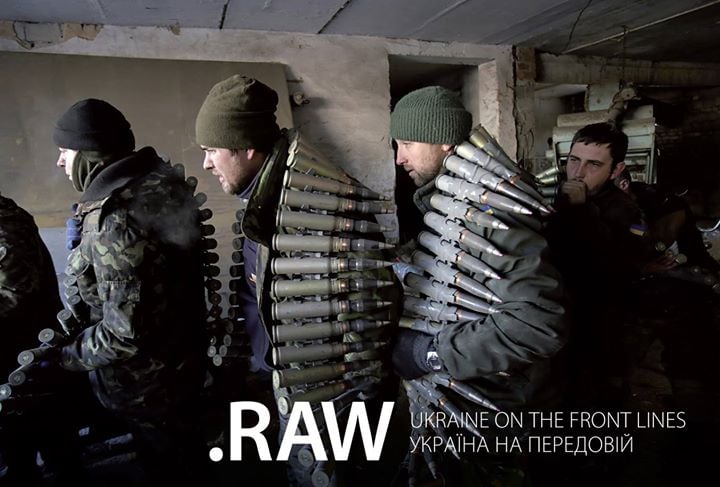 Opening the ceremony, Artem Bidenko, State Secretary of the Ministry of Information Policy of Ukraine, appealed to all Ukrainians living abroad to bring their friends of non-Ukrainian origin “to show them what Ukraine is and what’s been happening in Ukraine”.

Read alsoKuchma: Russia suggests redrawing Ukraine border in eastAlina Frolova, Director of the Centre for Strategic Communications, said that the works had already been exhibited in Paris and Berlin.

“.RAW Ukraine on the Frontline” is a documentary review of hostilities in Eastern Ukraine from 2014 raging since 2014, showing the transformation of the Ukrainian Army and society through recollections of witnesses and direct participants.

Read alsoMH17 crash: Сhronicles of Russian liesGuests will get acquainted with the documentary record of the shocking event which has changed Ukraine and the whole world for good.

The title, “.RAW Ukraine on the Frontline” was not a random choice, since Ukraine is not only the site of the military conflict but also the testing ground of information warfare.

33 photographers from Ukraine, Belarus and the U.S. contributed to “.RAW Ukraine on the Frontline”; among them are recognized photo journalists, photo correspondents and curators from Ukraine and abroad, including Alexander Glyadyelov, Brendan Hoffman, Iosyf Syvenkyi, Oleksandr Vasiukovych and others.

The project became a platform for Ukraine’s social and information and cultural diplomacy in the international arena.

“.RAW Story of Changes of Ukrainians and Army” is not the first project by StratCom Ukraine designed to develop Ukraine’s cultural and public diplomacy.

The publication “.RAW Story of Changes of Ukrainians and Army” is yet another stage of the two-year project “Army: Rebirth”, which started as far back as in 2016.

The exhibit will last until December 30.

If you see a spelling error on our site, select it and press Ctrl+Enter
Tags:News of UkraineDonbasUkraineUSARussianAggressionhybridwarstratcomRaw