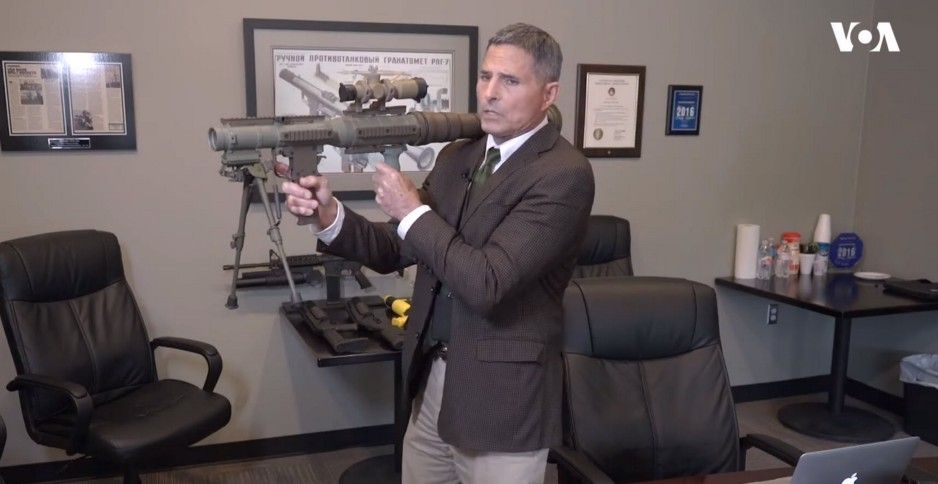 In December 2017, the Ukrainian defense trade company Spetstechnoexport announced that it worked with the American company AirTronic, based in Spring Branch, Texas, to supply PSRL-1 (Precision Shoulder-Fired Rocket Launcher, an “advanced version of the Soviet RPG-7”) weapons systems to the Ukrainian Armed Forces, DFR Lab wrote.

A contract, as the press release described, was drawn up in 2016 with approval from the U.S. Embassy in Ukraine.

Read alsoAzov Regiment already has U.S. weapons – BellingcatTwo weeks ago, Voice of America spoke with the CEO of AirTronic in Texas, who described how the manufacturer is “continuing deliveries” to Ukraine up to the current moment in “very close coordination with the U.S. Embassy, with the U.S. State Department, with the U.S. Pentagon and with the Ukrainian government.”

AirTronic did not release specific details on the number of PSRL-1 units delivered to Ukraine, but the leaked contract from Southfront and additional details from Ukrainian journalists filled the information gap.

A shipment of 100 PSRL-1 systems reportedly arrived in Ukraine in April 2017, as confirmed by both the contract leaked by a pro-separatist news outlet and Ukrainian journalist Yury Butusov. According to a Facebook post by Butusov, many of these 100 PSRL-1 systems were sent to military units in the Donbas, including military unit 3057 based in Mariupol—more widely known as the unit made up of soldiers from the Azov Regiment, integrated into the Ukrainian National Guard.

Butusov identified Azov as a recipient of the PSRL-1 systems. On July 10, 2017, Azov was introduced to the new weapons, as their press service stated that they would “soon” receive the grenade launchers.

While verified information about the sale of American-made grenade launchers in Ukraine is available, unanswered questions remain. Most importantly, it is unclear how many of these PSRL-1 systems have been sent to the front lines of the Donbas, such as “Sektor M” near Mariupol where the Azov Battalion is active. Additionally, just how widely, if at all, these weapons have been used in non-training situations in the Donbas.

There have yet to be any confirmed, publicized casualties from the usage of a PSRL-1 in the Donbas, but the first verified incident with one of these weapons is likely to create some turmoil in Washington and Moscow, especially against the backdrop of additional American weapon sales to Ukraine.

If you see a spelling error on our site, select it and press Ctrl+Enter
Tags:News of UkraineUkraineUSAlethalaidAzov