Jamala refused to participate in reelection for Eurovision

It is said in the open letter... 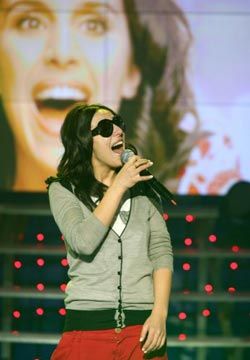 Singer Jamala refused to take part in extra round of the national selection of participants for “Eurovision-2011” international song contest.

It is said in the open letter of Jamala, the text of which is passed to UNIAN.

Jamala stressed that she absolutely does not regret having taken part in the national selection for “Eurovision-2011”.

“Everybody knows well the results of the voting.  I am happy that three times more people voted for me than for the artist who received the first place. I am extremely grateful to all those who believed and supported me”, noted Jamala. At the same time she stressed that she does not want to have anything in common with “manipulations, corruption and ambitions of some figures whose interest they use as a cover”.

“Now another so called “voting” has been announced. I am absolutely sure that people who want to clinch a deal will do everything to prove their rightness and humble both me and other participants once again. I understand that they have no way out. Even if they have to admit that people voted for me, they will do everything to throw mud at me and to persuade everybody that re-voting is carried out specially “for Jamala”, the letter of the participat reads.

Jamala assures that after the results of voting were made public on February 26, either she or her team cast no reproaches upon organizers.

“In future we will abstain from comments because the true is obvious”, said the singer.

“I made a decision that was rather difficult for me – not to participate in any demonstrative showdowns and incomplete voting the main goal of which is to earn some money near Eurovision pother. I present my sincere apologies to my fans who expected me to participate in so called “super final”, but to do this means to stop being myself”, underlined Jamala.

According to the words of Jamala she lost a confidence in people who will organize and control this voting.

Jamala thanked all her fans for support and understanding, and wished success to those who will represent Ukraine at Eurovision-2011.