Former Kyiv Mayor got into accident

Omelchenko got into accident 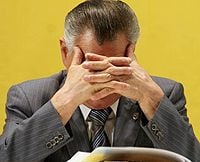 Oleksandr Omelchenko got into accident near 5.00 am. It happened at the 38th kilometer of Zhytomyr – Kyiv road, near Berezivka village.

Oleksandr Omelchenko  drove on Toyota Land Cruiser at rather high-speed, said representatives of Oblast State Automobile Inspection to “Komsomolska Pravda in Ukraine”. The driver of Omelchenko did not estimate the distance and run into KAMAZ, which drove in the same direction.

- Fortunately, everything finished well and nobody received serious injuries, - SAU representatives assured. – The losses from the side of Oleksandr Omelchenko – is rumpled front of the car and KAMAZ driver also has inconsiderable damages.