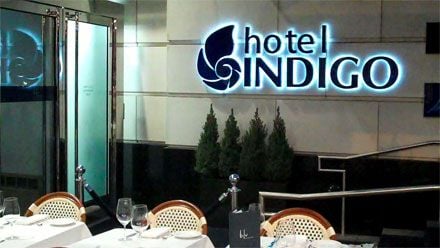 As became known to the newspaper Kommersant-Ukraine, the company signed a letter of intent on the management of the hotel in Kiev with the company of Dnepropetrovsk businessman Gennady Korban.

Last week InterContinental signed a letter of intent with the company " Budinvest" about the management of the hotel on the Gorkogo str. , 44, told the CEO of  " Budinvest" Natalya Novikova. Ukrainian company belongs to Axelrod Estate of Gennady Korban ( business partner of Gennady Axelrod, who died tragically in 2012) . According to Ms. Novikova , the hotel will develop two brands of InterContinental: the first ten floors of the hotel will be taken by Hotel Indigo ( about 240 rooms) , and the remaining 12 – by Staybridge Suits ( about 80 apartments). Investments in the construction of the hotel will be $ 30-40 million (payback period - about ten years). "Now the works are carried out at the ground level. We plan to complete the object in two years ", - said Ms. Novikova.

This information was confirmed to the "Ъ" in the IHG UK office. "InterContinental signed a letter of intent with Axelrod Estate on the hotel management in Kiev. This is about Hotel Indigo and Staybridge Suits", - said PR- manager of the company Laura Baker. The company could not provide us with more detailed comments before final formalizing of cooperation.

InterContinental Hotels Group network brings together more than 4.6 thousand hotels in 100 countries of the world with key count of 678 thousand. It owns the following hotel brands: InterContinental, Crowne Plaza, Hotel Indigo, Holiday Inn Hotels & Resorts, Holiday Inn Express, Staybridge Suites, Candlewood Suites, and also EVEN Hotels and HUALUXE Hotels & Resorts. In 2012, net revenue was $ 21.2 billion , in the first six months of 2013 - $ 10.4 billion. The company is listed on the London and New York (NYSE) stock exchanges. Yesterday capitalization on the NYSE was $ 7.75 billion.