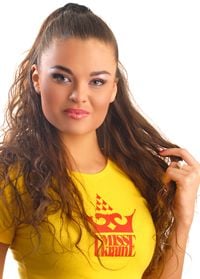 The current miss was elected by Naomi Kembell, Oleksandra Nikolaenko, Larysa Udovychenko, Fill Raffin and Ukrainian actor Volodymyr Goryanskyi. This structure of jury was named as the most starry and unbiased for the whole history of the contest, which took place in Ukraine. The competitors three times appeared at the stage: firstly, it was acquaintance, secondly, it was entrance in swimsuits and the last one was intellectual contest.