Swastika graffiti on President's Office wall appeared after rally in support of jailed activist was over, police admit

Law enforcers have already identified the perpetrator who spray-painted the Nazi symbol. 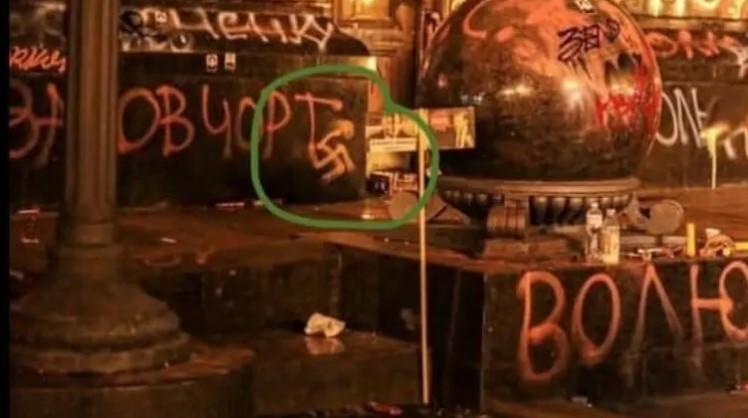 A Nazi swastika was painted on the wall of the President's Office in Kyiv already after a protest rally in support of a recently jailed Odesa activist Serhiy Sternenko held March 20 was over, police chief reported Tuesday.

Addressing the Verkhovna Rada on March 30, Chief of the National Police, Ihor Klymenko, said law enforcers had already identified the culprit responsible for the act [that led many to associate the Nazi symbol with the protesters who rallied outside the President's Office], Ukrainian Pravda reported.

"As regards the swastika on the wall of the President's Office, the symbol, indeed, appeared after the rally ended, at 11:35 pm. We have identified that person. I will not be disclosing any details until all procedural paperwork is properly drawn up," Klymenko said.

On March 20, a rally was held outside the President's Office in Kyiv in support of the convicted public activist, Serhiy Sternenko.

Deputy Interior Minister Anton Gerashchenko said those involved in the riot outside the President's Office would be held responsible for hooliganism. Several activists have already been detained and charged.

In 2015, Sternenko's house in the city of Odesa was searched. The activist voluntarily handed law enforcers his air gun, a collectible knife, and a noise pistol.

The investigation was launched following a report by a local elected official, an anti-Maidan activist Sergei Shcherbich who said he had been abducted and illegally held. Shcherbych claimed Sternenko's intention was to rob him of UAH 300 (about US$11 at the current forex rate).

Sternenko was served with charge papers and put into custody before being bailed out.

Later, the activist was also accused of illegal possession of weapons.

Odesa's Prymorsky District Court on February 23, 2021, passed a guilty verdict in the case of activist Serhiy Sternenko, as well as his accomplice Ruslan Demchuk, both of whom have been convicted of abduction. The ruling on Sternenko provides for seven years and three months in prison and confiscation of half of the convict's property.

Rallies swept across dozens of Ukrainian cities protesting the verdict activists believe was unlawful, calling for justice in the case.

On a separate note, several criminal cases have been brought up against Sternenko, including homicide charges over the death of Ivan Kuznetsov, a person identified as one of the attackers who assaulted Sternenko in 2018 in what Sternenko believes was an attempt on his life. Sternenko maintained that he had acted in self-defense.

Ukrainian Interior Minister Arsen Avakov believes that blogger and activist Serhiy Sternenko, who was recently sentenced to seven years on abduction charges has invented for himself an image of a hero rebel.

If you see a spelling error on our site, select it and press Ctrl+Enter
Tags:News of UkrainepolicerallyPresident's OfficeSternenko