At least 10 water reservoirs dried up on the annexed peninsula last year. 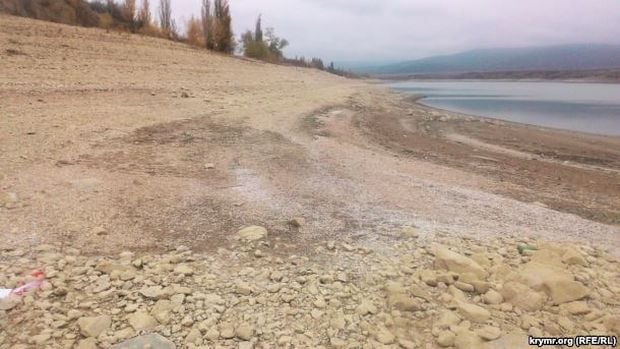 Russian-occupied Crimea is facing an ecological disaster over the drying water reservoirs, which may lead to all lakes disappearing across the peninsula, journalists report.

In particular, the unique Krasnokamianka Lake, Sasyk-Syvash Lake in Saky district, and the lake by the village of Zalisne in Bakhchisarai district have dried up.

It is estimated that there will be no lakes in Crimea in about 30 years if 10 such water reservoirs dry up annually.

Deputy Director of the Ukrainian Institute of Water Problems and Land Reclamation Mykhailo Yatsiuk elaborated on the issue.

"If there is precipitation shortage, water from lakes 'feeds' groundwater or soil in the surrounding area. Given the rising temperature and evaporation, water deficit increases. Sooner or later it leads to complete loss of water and, respectively, lakes," he said.

The expert believes the blocked North Crimean Canal, lower precipitation, and human activities, including mass drilling of wells are among main causes behind the trend.

Prior to the occupation of Crimea by Russia, Ukraine used to cover up to 85% of the peninsula's needs for freshwater through the North Crimean Canal.

After the annexation of Crimea by Russia in 2014, Ukraine severed water supplies to the occupied peninsula.

Water reserves in Crimea are replenished from natural runoff reservoirs and underground sources.

Environmentalists say the regular use of water from underground sources has led to soil salinization.

On September 7, in Simferopol, Bakhchisarai, and Simferopol districts, due to ongoing drought and shallowing of reservoirs, the third, most severe, stage of water supply restrictions was introduced.

On the same day, an OHCHR representative said it is Russia that bears responsibility for ensuring water supplies to occupied Crimea.

Ukrainian Foreign Minister Dmytro Kuleba says the resumption of water supplies to Crimea would be possible only in the context of the end of the Russian occupation. At the same time, there is no humanitarian crisis with freshwater in occupied Crimea whatsoever, the chief of Ukraine's diplomacy emphasizes. "The narrative about the 'humanitarian crisis' was invented by Russian propaganda in order to convince the world that water supplies to Crimea are necessary."

If you see a spelling error on our site, select it and press Ctrl+Enter
Tags:News of UkraineCrimeaenvironmentwater