A wreath was laid at the Tomb of the Unknown Soldier in Kyiv's Vichnoyi Slavy [Eternal Glory] Park on behalf of the president. 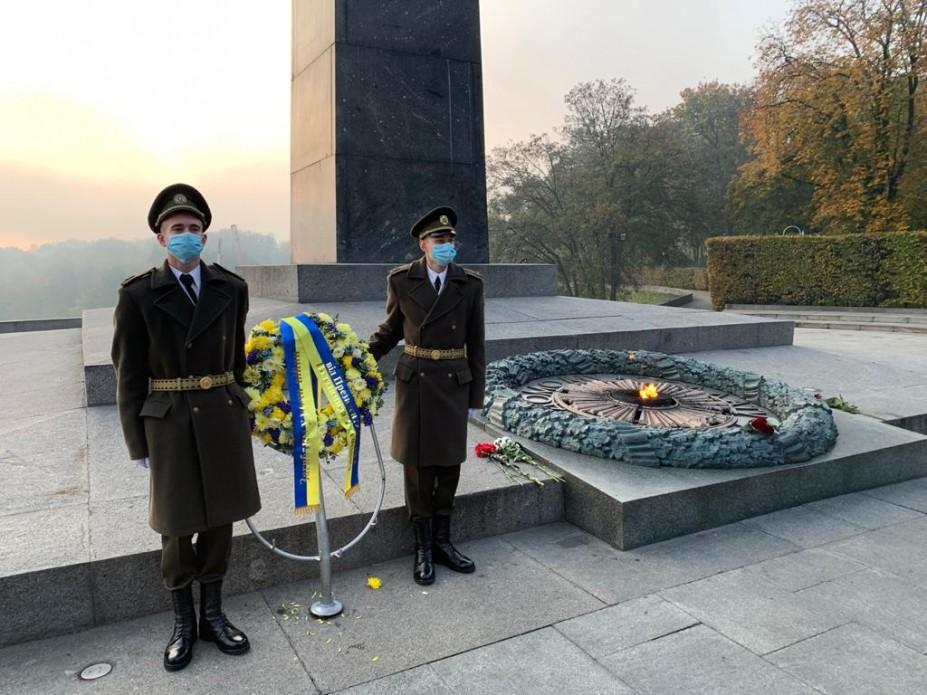 On the 76th anniversary of Ukraine's liberation from Nazi invaders, celebrated today, October 28, Ukrainian President Volodymyr Zelensky has honored the memory of Ukrainian citizens who sacrificed their lives to this end.

"Ukraine will always remember those who sacrificed their lives to liberate our Homeland from invaders. Ukrainians paid a very high price for peace, and our commitment to preserving peace is the expression of our highest respect for the memory of the fallen," the press service of the President's Office quoted Zelensky as saying on October 28.

A wreath was laid at the Tomb of the Unknown Soldier in Kyiv's Vichnoyi Slavy [Eternal Glory] Park on behalf of the president, the press service said.

Chairman of the Verkhovna Rada, Ukraine's parliament, Dmytro Razumkov reminded that World War II became a nightmare for every Ukrainian family as it brought losses, pain, and tears.

"There are days we'll never forget. One of them is Day of Ukraine's liberation from Nazi invaders. No matter how many years have passed, we remember the courage and will to win, as well as the sacrifice and the struggle of everyone for a peaceful sky for all of us," he said.

Read alsoMFA Ukraine pays tribute to "Executed Renaissance" – victims of Stalin's regimeToday, Ukrainian citizens honor the memory of those who sacrificed their lives to liberate the country from Nazi troops.

"Over the years, all Ukrainian generations will recall their feat, World War II veterans' courage and bravery. The heroes of those times stood up firmly, without hesitation, to defend their families, their land, their right to a happy future," Razumkov said. "But at the same time it showed how all participants in those events were united in their commitment to freedom. Today we bow to all those who liberated the homeland from the enemy, we are proud of their heroism, perseverance and patriotism! We remember and thank them!"

This is Ukraine's national holiday, which is marked annually on October 28.

In 2009, the then Ukrainian Economy Ministry Sergiy Tigipko initiated the celebration of the holiday officially.

If you see a spelling error on our site, select it and press Ctrl+Enter
Tags:News of UkraineanniversaryWW2liberationNazism