Fans saw off Tymoshchuk to Germany 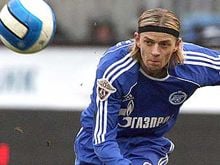 The meeting was short-term, but very cordial. 30 people made a live corridor along the road to airport with fire sticks in hands, another group blocked traffic movement for some tome and held a banner with an inscription: “Thanks for all, captain”.  A. Tymoshchuk got out of the car and said goodbye to fans, having said: “There are no such fans like in  St. Petersburg. I will remember the time my staying here forever. Honestly, I even don’t want to leave”.