Ukraine – champion of Europe on football 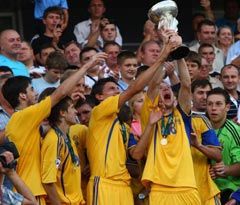 Combined team of Ukraine won at the Championship of Europe on Football among players at the age up to 19 year (U19).

Ukrainian football players won a victory in the match with combined team of England. It was the final match of European championship, which took place today.

It is the first victory of youthful football combined team of Ukraine in the history of the European championship.

The Championship of Europe on Football among players at the age up to 19 years took place from July 21 – August 2, 2009 in Donetsk, and Mariupol.