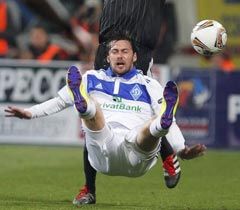 Coach of Kyiv “Dynamo” Yuri Semin believes that forward Artem Milevskyi started working actively at trainings and test matches, because he wants to move forward. And not because he saw a rival in new player Admir Mehmedi.

“It seems to me that serious criticism from mass media, fans and the President of the club influenced him considerably. Moreover, A.  Milevskyi is a clever man, who understand that it useful to move forward and not to mark time”, said Y. Semin.