Observers could not ascertain whether it carried a coffin or not. 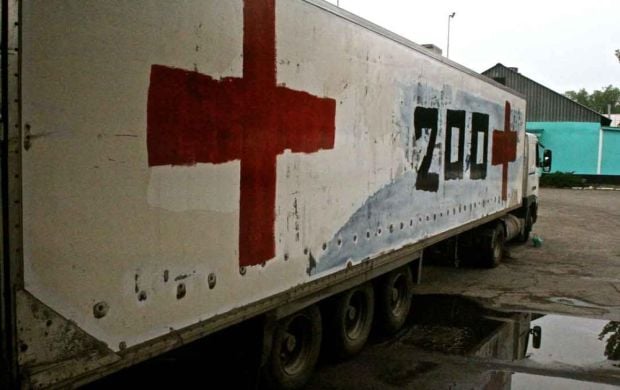 The vehicle was seen on May 12 / Photo from news.vice.com/Harriet Salem

The OSCE Observer Mission based at the Russian checkpoints of Gukovo and Donetsk has seen a funeral service vehicle coming from Russia to the occupied Donbas, eastern Ukraine.

"On 12 May at 18:55 a funeral service vehicle arrived at the Gukovo BCP [Border Crossing Point] from the Russian side and crossed quickly into Ukraine. The same day at 20:42, the vehicle returned to the Russian Federation," the OSCE said in its weekly update published on May 15, 2018.

An observer team (OT) could not ascertain whether it carried a coffin or not, the OSCE said.

What is more, the OTs observed ambulances on three occasions at the Donetsk BCP during the reporting period.

According to the OSCE, at 09:56 on May 10, at the Donetsk BCP, a convoy of six vehicles, four civilian cars and two police escorts arrived from the Russian Federation. "The vehicles underwent border formalities and crossed to Ukraine at 10:20. One of the police cars went back to the Russian Federation immediately. The OT could observe passengers in civilian clothes. During the convoy crossing, Russian Federation border guards stopped traffic inside the BCP," it said.

If you see a spelling error on our site, select it and press Ctrl+Enter
Tags:RussianAggressionOSCEoccupiedDonbas