The operation was carried out by the 54th Separate Mechanized Brigade of the Armed Forces of Ukraine. 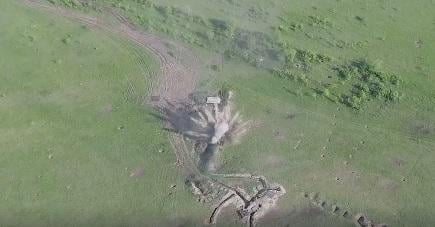 Volunteers of the "Come Back Alive" charity organization published on social networks the aerial footage showing a targeted artillery strike by Ukraine's Joint Forces on one of the positions of Russian proxy forces in eastern Ukraine's warzone.

"After a few days of preparations and intensive training and just 15 minutes of our recon team's work, enemy dugouts were destroyed as well as two units of military hardware, while militants are seen fleeing chaotically, losing for a long time any will to shell civilians," the report said.

The video states that the operation was carried out by the 54th Separate Mechanized Brigade of the Armed Forces of Ukraine.

If you see a spelling error on our site, select it and press Ctrl+Enter
Tags:DonbasUkraineRussianAggressionhybridwarstrikejointforcesJFO