Exact locations of Russian Signals units in the Ukrainian territory have been revealed. 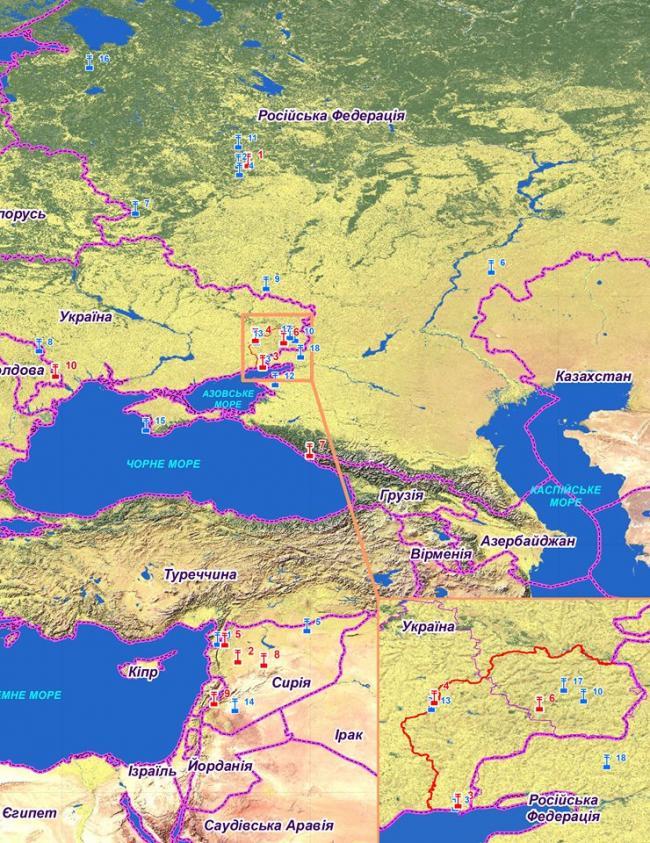 Denial is one of the Kremlin's major tools in trying to refute massive bulks of reports claiming Moscow's support for militants in Donbas. The "We Are Not There" narrative is a product of such behavior while Russia constantly demands hard evidence of their military presence in eastern Ukraine, according to Information Resistance, an OSINT non-government group in Ukraine.

It is about the latest hi-end encrypted communication stations, produced in Russia for and used exclusively by the Russian military.

The map published by IR shows locations of mobile terminals used to set up encrypted video conference calls. The exact coordinates of said terminals have also been disclosed.

As of April 2018, at least 18 mobile stations operated in the Russian army's satellite communications network. Five of them were based in Russia-occupied parts of Ukraine - four in the occupied areas of Donbas (Novoazovsk and Yasynuvata, Donetsk region, as well as Kruhlyk and Kamenka in Luhansk region) and one in Crimea (Sevastopol).

As of early June, the number of mobile stations in the Russian army's satellite communications network was reduced to 10, three of them remaining in Russia-occupied Ukrainian territories - in Novoazovsk and Vasyliivka in Donetsk region and Khrustalny in Luhansk region.

It is noted that satellite signal is used most intensively to set up communication for the units that have been deployed on foreign missions. In this case, it is about the missions in Ukraine and Syria. Communication with the help of such stations is set up among control units, no lower than the brigade level.

In the Russian Army, satellite communications with its units, including those performing tasks beyond Russia borders,  are provided by the 14th Main Communication Center of the General Staff (Moscow). Mobile satcom terminals in its arsenal have the same type of equipment ("Auriga" type) and operate through a common frequency pool: 1 hub station and 16 subscriber channels of the Russian repeater satellite Yamal-402 (55E).

An interesting detail is that such stations cannot be operated by amateurs and neither they can be "found in Donbas mines" as the Russian propaganda once claimed of weapons and ammunition used by militants in eastern Ukraine. These stations are supplied to the Russian army exclusively, IR says. It is about sophisticated software and cryptographic protection systems that can only be operated by specially trained servicemen of the Russian Armed Forces cleared to work with cryptographic equipment.

Even theoretically speaking, transferring such hi-end signals equipment to militants in the territory of Ukraine know would be impossible, in terms of access requirements to any classified equipment.

If you see a spelling error on our site, select it and press Ctrl+Enter
Tags:RussiaDonbasUkraineRussianAggressionevidencemilitarypresencecommunicationssatellite